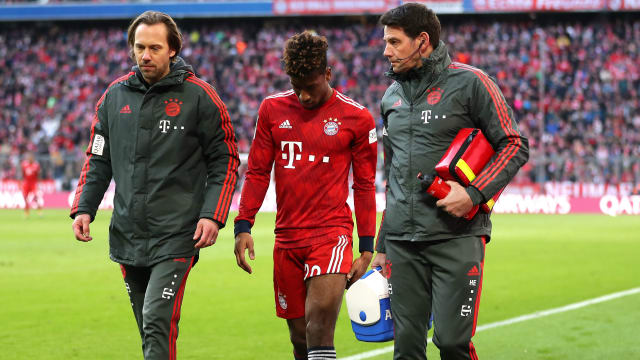 Coman replaced fellow winger Franck Ribery in the 58th minute of Bayern's 1-0 Bundesliga win at the Allianz Arena on Saturday.

But, after Javi Martinez scored the only goal of the game five minutes earlier, Coman had to be taken off after apparently hurting the back of his thigh, and the France international went straight down the tunnel.

Coman has been plagued by injury during his career and he hurt his ankle in last week’s 3-2 victory at Augsburg in which he scored twice and created the winner.

The 22-year-old was passed fit for Tuesday's Champions League last-16 first leg against Liverpool and played 81 minutes as Bayern earned a 0-0 draw away to last season's finalists.

Coman missed three months of action early in the season after damaging ankle ligaments and he has previously suggested he may consider retiring from the game early if he cannot stay fit.

Kovac, though, is hoping tests on the latest injury problem come back with good news.

"He felt something on the muscle. We currently have no new information," Kovac said. "Tomorrow [Sunday], he will have a scan.

"If anything bigger happens to Kingsley Coman then he will not be able to play against Liverpool [on March 13]. I hope it's not that bad."

Niko #Kovac reacts to #FCBBSC : "We struggled in the first half. The game was decided on a set piece. Overall, I'm happy." #FCBayern pic.twitter.com/PE3H7vD75D

Bayern moved level on points with Borussia Dortmund at the top of the table after recording their 10th win in 11 Bundesliga matches.

Dortmund can go three points clear again by defeating Bayer Leverkusen on Sunday but Kovac was satisfied with his side's battling win against Hertha, who had Karim Rekik sent off with six minutes left.

"We won a very difficult game today," he added. "We have lost many points to Hertha in recent years. We finished a great week successfully.

"We expect only good and beautiful games. Today we had to show will and mentality - that made the team really good.

"I do not care what they [Dortmund] think. We won our game. Now we recover for two days.

"I'll be watching the Borussia game on the couch in peace."