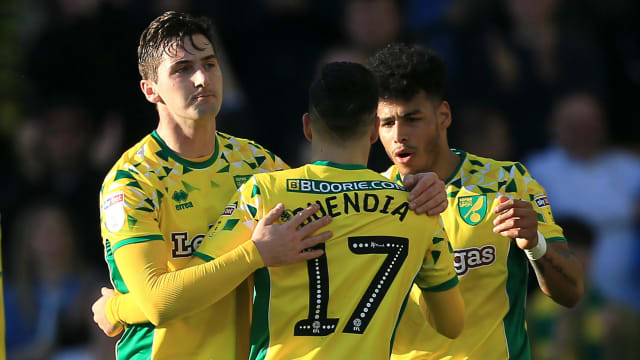 Norwich City and Leeds United each scored second-half winners as the Championship promotion race kicked up a gear on Saturday.

A 2-0 home win against freefalling QPR saw Middlesbrough solidify their fifth place behind West Brom and Sheffield United, who meet at The Hawthorns later in the day, while Preston North End boosted their play-off hopes with a 3-1 success at FA Cup quarter-finalists Millwall.

Bottom side Ipswich Town were denied a crucial victory at Wigan Athletic by Joe Garner's injury-time goal while Reading and Rotherham United are locked together on 30 points after playing out a 1-1 draw.

Norwich and Leeds did not have it easy with both of the Championship's top two having been in grave danger of dropping decisive points in the battle to reach the Premier League.

Bristol City were in front twice at Carrow Road thanks to goals from Jamie Paterson and Callum O'Dowda but McLean's second of the game, a superb 25-yard drive, saw the leaders prevail.

There was more than a stroke of luck about the winner, however, as Alioski's intended cross curled and dipped over the head of visiting goalkeeper Remi Matthews.

| Is that today’s winning goal? Gjanni Alioski runs over to celebrate in front of the North Stand. 2-1 pic.twitter.com/fteK42ctFb

With sixth-placed Bristol City beaten there was a chance for the chasing pack to make up ground on the play-off spots, but Birmingham City could only draw 2-2 at home to Blackburn Rovers.

In-form striker Che Adams scored twice - taking his 2019 Championship tally to 10 - by hitting both the opening and final goals of a gripping contest at St. Andrew's.

Rovers captain Charlie Mulgrew scored direct from a corner for the third time this season but, after Danny Graham had seemingly won it for Tony Mowbray's men, Adams tucked home from a tight angle for a share of the spoils.

Stoke City and Aston Villa also drew on the day tributes were paid to the late goalkeeping great Gordon Banks, with Sam Vokes' first strike since joining the Potters from Burnley cancelled out by Albert Adomah's goal.

So, @Charlie_Mulgrew has now scored directly from a corner three times this season! #EFL | #Roverspic.twitter.com/pQyCQAcrzO

LATE DRAMA AT THE BOTTOM

Despite manager Paul Lambert serving a touchline ban, Ipswich were on track for a huge win at Wigan thanks to Will Keane's first-half penalty, but Garner struck from close range in the 91st minute to deny his former club and earn the Latics a point.

Ovie Ejaria's goal had given Reading a vital lead at home to Rotherham, with the Royals set to move three points away from the drop zone. But a scruffy finish from Semi Ajayi with 11 minutes to go kept the Millers on Reading's tail.