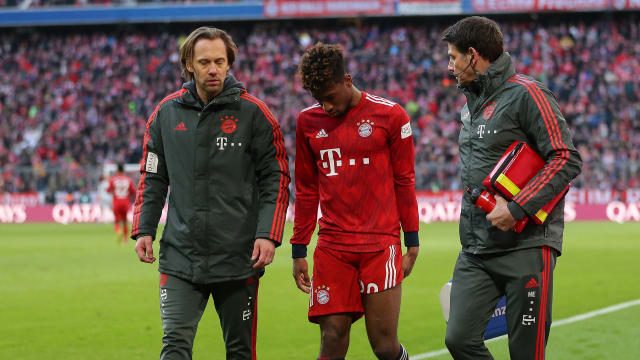 Kingsley Coman has sustained a torn hamstring, Bayern Munich have confirmed, with the winger a major doubt for the second leg of their Champions League tie with Liverpool as a result.

Coman came off the bench during Bayern's 1-0 Bundesliga win at home to Hertha Berlin on Saturday, but lasted only nine minutes before he had to be replaced.

The France winger hobbled off and went straight down the tunnel, with coach Niko Kovac indicating tests would be needed to determine the extent of the injury.

Bayern duly confirmed Coman has torn his left hamstring, with the 22-year-old expected to be out for months rather than weeks.

He is therefore highly likely to be out for Bayern's return leg against Liverpool on March 13, with the sides having drawn 0-0 at Anfield.

"Kingsley Coman will not be available for Bayern Munich for now," read a club statement.

"This is the result of the tests conducted by Bayern's medical staff. Coman had to be subbed off [67th minute] only nine minutes after being subbed on [58th minute]."

Coman played 81 minutes of the Liverpool game having been a pre-match doubt due to another injury scare.

He was hurt at the end of Bayern's 3-2 Bundesliga win at Augsburg, in which he scored twice and set up David Alaba for the winner, although tests cleared him of an ankle injury.

Coman missed three months of action at the start of the season due to ankle ligament damage sustained on the opening weekend of the campaign.

The attacker has previously signalled he would consider early retirement from the game if his injury issues persist, torn knee ligaments and serious ankle problems having marred his 2016-17 season.

"It was a very difficult year," Coman told TF1. "When I hurt myself, it was the end of the world for me.

"I hope I don't have to relive what I've been through, enough is enough. I will not accept a third operation – it will mean maybe my foot is not made for this level. I will then lead another life, an anonymous life."