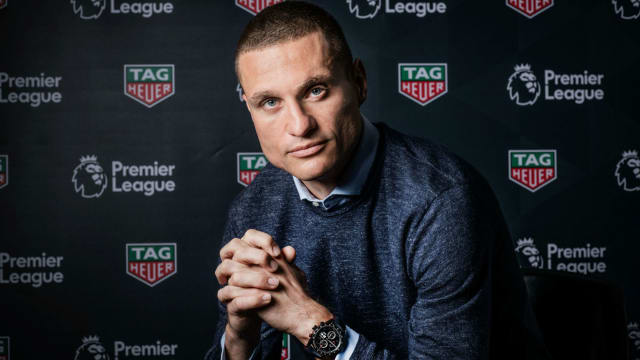 Nemanja Vidic insisted he would not swap any of Manchester United's defenders for Virgil van Dijk or his Liverpool team-mates, while praising Victor Lindelof for displaying "character" to turn around his form.

United led the Premier League with 19 clean sheets in 2017-18 yet their goal has been breached in all but six of their 26 games to date this term.

Despite that, Sweden international Lindelof has received plaudits as one of United's better performers, the 24-year-old establishing himself at the heart of the club's defence after a difficult first season at Old Trafford.

Vidic, who spent eight years at United between 2006 and 2014, also took some time to find his feet in England before forming a formidable partnership with Rio Ferdinand.

The Serbian, who was speaking on behalf of TAG Heuer, the official timekeeping partner of the Premier League, has been impressed by how Lindelof has responded to his own early struggles and feels United's current centre-back options are as strong as their Premier League rivals' defenders.

"I think [Lindelof] had a difficult time in the beginning," Vidic told Omnisport.

"Well done to him to come back. It's not easy, especially playing for Man United, big club, to not start that well and have criticism from the media.

"To come back from that and now perform well, it shows some character as well, which is important if you want to play for Man United.

"He has some quality definitely. He has done really well. I think Phil Jones did well in the recent games he played, Chris Smalling is a good defender, [Eric] Bailly as well. I think we have four solid defenders and with the right match I think they can perform to the best of their capabilities.

"Overall, I said even before when they didn't have great games, if you look at the other teams, I would not have any defenders of Liverpool or Chelsea, I don't think they have better defenders than we have.

"I think now the team is playing better, they have more confidence and there will come even better matches from them."

Liverpool are the side with the most clean sheets in the Premier League this term, their 14 two more than title rivals Manchester City's 12.

The presence of Virgil van Dijk at the heart of their defence is a big reason for that and though Vidic has been impressed by the £75million man, he noted praise is easier to come by for defenders when the whole team is performing well.

Proud to be named @premierleague POTM December! Thanks to all my teammates, staff and fans! pic.twitter.com/6vWcMqS8aP

"He's a great defender, top defender, but I'm saying when teams are doing well, everyone gets recognition. I know that because I played for Man United and when you're doing well, when you're scoring goals, [getting] a few clean sheets, straight away people start talking about how good you are.

"And maybe you play some good matches when the team lost but people didn't recognise that. I think when you start winning, when you start having clean sheets, you're getting more recognition.

"I think that's why I like to believe that we have good defenders [at United] and I think [the form] has been better coming from our defenders and the whole team, I think."