Hodgson inspired by Attenborough ahead of Premier League record 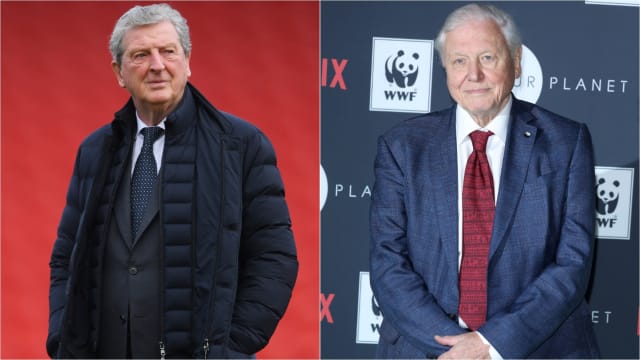 Roy Hodgson is taking inspiration from UK broadcasting veteran David Attenborough as he prepares to set a record as the oldest manager in a Premier League match.

Crystal Palace's trip to Leicester City on Saturday will see Hodgson take charge of a game in the top flight at the age of 71 years and 198 days, surpassing the record held by the late Bobby Robson.

The former England boss admits it will be special to move beyond Robson's tally but insists age is not necessarily any measure of ability.

He pointed to the continued success of Attenborough, the noted naturalist and documentary host, who will turn 93 in May.

"I still enjoy this work, I'm always looking forward to the next game. It's nice to still be in a job like this at the age I've reached. I think age is definitely a number. There are people who are older than me who show no signs [of retiring].

"I don't know how old Sir David Attenborough is but most of us think he's very, very good. He was good then and still good now. If I were being honest, at the time Sir Bobby set that record and he was doing well, I probably wouldn't have thought I'd ever get close to the milestone."

How it stands ahead of a big #PL weekend... pic.twitter.com/7dIwBsALzM

Palace are unbeaten in five games in all competitions, a run that has seen them book an FA Cup quarter-final against Watford.

But despite Palace climbing to 13th in the Premier League, a place behind Leicester, Hodgson remains focused on the battle against relegation rather than his record.

"I've never given it much thought. I've been obliged to recently," he said. "My views regarding age haven't really changed. You're as old as you feel. It's a milestone, a historical mark I guess I can be very pleased about. Otherwise I don't pay any great attention to it.

"Achievements are often more interesting to you when you look back on them. When you're in the middle of an important job, fighting for Premier League points, there isn't much time to reflect on the journey you've been on.

"You've got to like it, to enjoy the work. You've got to maintain a certain amount of youthfulness in your demeanour, look after yourself and be very lucky to be given jobs where you can hopefully make an impact."