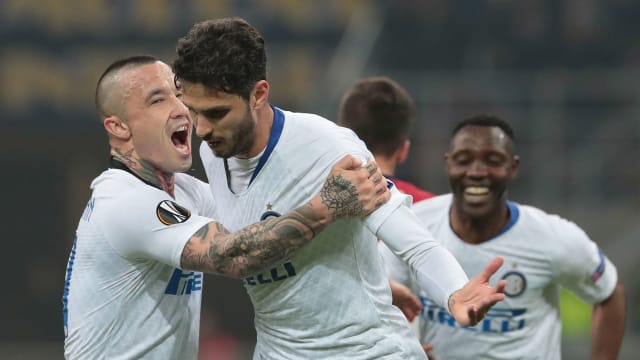 Inter made light work of Mauro Icardi's continued absence as they booked their place in the Europa League last 16 with a routine 4-0 win over Rapid Vienna on Thursday.

The Argentine has now missed Inter's last three games – including the 1-0 first-leg win in Austria last week – amid speculation he could leave the club after being stripped of the captaincy.

Watching on from the San Siro stands, Icardi saw his team-mates race into a two-goal lead after just 18 minutes. Matias Vecino set them on their way after 11 minutes with his second goal of the season and Andrea Ranocchia doubled their advantage soon after with a sweet strike.

Ivan Perisic added a sumptuous third 10 minutes from time before teeing up Matteo Politano for a fourth as Inter strolled to a fourth consecutive win in all competitions.

Hits a worldy
Mobbed by teammates

What a moment for @23_Frog! #FORZAINTER#InterRapidpic.twitter.com/PYRrfwNxsn

The hosts started brightly and quickly broke the deadlock, Vecino steering into the far corner at the back post after Lautaro Martinez failed to make contact with a left-wing cross.

Ranocchia then made the most of just his second start of the campaign, lashing a right-foot volley into the bottom corner from 20 yards to double Inter's advantage seven minutes later.

Marcelo Brozovic squandered a glorious opportunity to add a third shortly before the break, blazing over from close range after Richard Strebinger had spilled a low shot.

Perisic flashed wide in the 70th minute, but got the goal his fine display deserved after 80 minutes. The Croatian latched onto Antonio Candreva's throughball, rounded Strebinger and lofted a delightful finish over the backtracking defenders.

Perisic was heavily involved in the fourth seven minutes later, pulling back a low cross for substitute Politano to steer home from 10 yards and add deserved gloss to the scoreline.

What does it mean? Inter revival continues apace

After a four-game winless run, Inter are now toasting four wins on the bounce – three of which have come without their talismanic frontman Icardi. Champions League qualification via Serie A is very much in their hands, but the Europa League represents a valuable fall-back option and the chance of a trophy to boot.

He continues to be linked with a move away from the club, but the Croatia winger cannot be accused of not giving his all for the club. He was a handful throughout and capped a wonderful display with a superb goal late on.

Martinez scored the only goal in Austria last week, but he did little in this game to suggest he could be a viable long-term replacement for Icardi. The Argentine rarely threatened the Rapid backline and was ultimately replaced in the 65th minute by Politano, who certainly did take his opportunity.

Inter resume Serie A duties away to Fiorentina on Sunday, while Rapid host Red Bull Salzburg in the Austrian Bundesliga on the same day.