Halep out, Kvitova dominant in Dubai 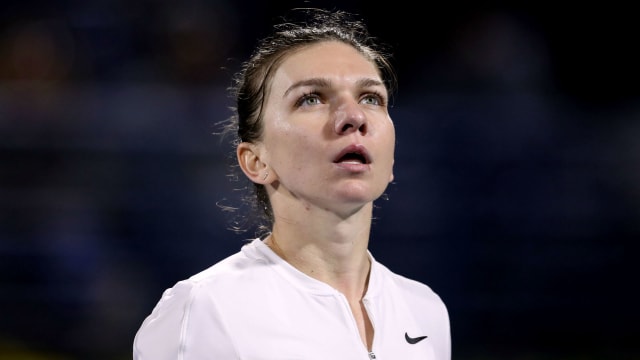 Belinda Bencic and Petra Kvitova will be pleased to have been in opposite halves of the draw after both secured impressive wins at the Dubai Tennis Championships.

The semi-final line-up for the Premier 5 event was confirmed on Thursday, with Bencic's battling victory over former world number one Simona Halep providing a highlight of the day's play.

While the Swiss had to come from a set down, Kvitova's progress was much more serene and included a second-set bagel.

The Australian Open finalist will now face Hsieh Su-wei, while reigning champion Elina Svitolina is up next for Bencic.

In her win over Aryna Sabalenka in the previous round, world number 45 Bencic saved six match points.

She did not sail quite so close to the wind against French Open champion Halep, but still had to overcome the odds to record a 4-6 6-4 6-2 success.

Halep, who had not dropped a set en route to the last eight, was broken in her opening service game of each set as her Dubai dreams were ended by a player ranked 44 places below her.

Kvitova was mightily impressive in her dominant 6-4 6-0 triumph over Victoria Kuzmova.

The second seed, who won the second set in just 25 minutes, adopted a ruthless approach to get the job done.

She said: "I didn't give her any time to do her job [and] maybe turn the match her way."

Hsieh was another player on the comeback trail on Thursday, digging deep at 5-1 down in the decider to see off world number five Karolina Pliskova.

The 33-year-old looked to have completely lost her way after losing the second set 6-1, having taken the first 6-4, particularly when she fell a double break down in the third.

But it was in that most testing of circumstances that she was able to find the answers.

This is the fourth year running Svitolina has reached the last four of this tournament, where she is eyeing a third title in a row.

The sixth seed defeated Carla Suarez Navarro 6-2 6-3 to maintain her bid to become the first woman to take the crown three years on the bounce.

Both Justine Henin and Venus Williams have their names etched on the trophy three or more times, but neither managed the hat-trick of consecutive triumphs that the Ukrainian is chasing.