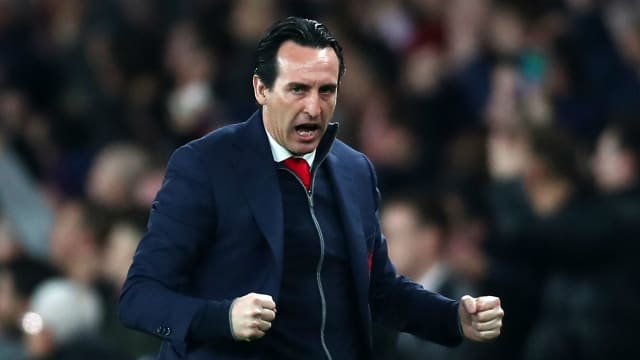 Unai Emery praised Arsenal for carrying out his game plan to a tee as they won 3-0 against BATE to seal a comfortable aggregate victory in the Europa League last 32.

The Gunners were beaten 1-0 away last week, but they were comfortable after scoring early in the home leg, with a fourth-minute own goal followed by headers from Shkodran Mustafi and Sokratis Papastathopoulos.

Sokratis' clinching third goal did not come until the hour mark, meaning Arsenal were one goal away from going out for a time at the start of the second half, but head coach Emery was pleased with the way his side handled the situation.

"We had to take precautions because, if they scored, they could have been back in the match," he told BT Sport.

"Our message was: if we score, carry on. If we score two, carry on. Carry on and carry on. We needed two, three or four goals for more [comfort] in the 90 minutes.

3:28 - Arsenal's opener against BATE Borisov was their fastest in European competition since Lukas Podolski netted against Galatasaray (2 minutes 1 second) in the Champions League in December 2014. Opener. #ARSBAT#UELpic.twitter.com/9nZuxOCj3l

"The players did our game plan as we wanted and they arrived in the box a lot with a lot of crosses. we showed the efficiency we wanted, which we didn't have away [from home]."

Mustafi similarly credited Arsenal for managing the game well when the tie was in the balance in the first hour.

"We knew we had to score but at the same time not concede," he said. "We managed it well. We started well and wanted to play forward.

"We had a lot of opportunities and the goals came from set-pieces, which is something we work on so it's good that it pays off. We're trying to produce on the pitch what we're doing on the training ground.

"The manager encourages us to stick with our style of play. We have to believe in ourselves and it will pay off."