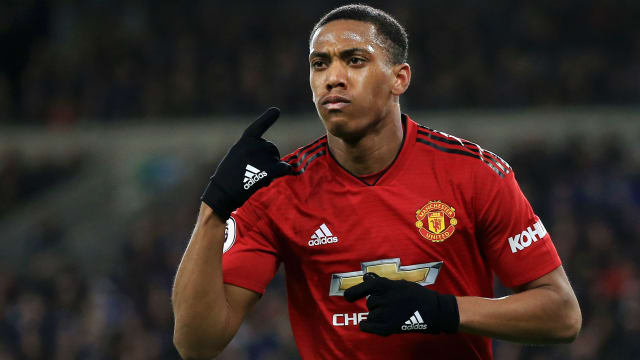 France coach Didier Deschamps saluted the resurgence of Anthony Martial at Manchester United and is certain the attacker has everything needed to be among the world's best players.

Martial joined United from Monaco in 2015 in a deal which could reportedly cost £58million and enjoyed a promising first season under Louis van Gaal, scoring 11 goals in 31 Premier League games and winning the Golden Boy award for the best under-21 player in Europe.

But after Van Gaal's exit, Martial seemed to regress under Jose Mourinho's guidance, finding himself in and out of the team in the Portuguese coach's first two seasons and his international career subsequently suffered, missing out on a spot in France's World Cup squad.

Martial looked set for the Old Trafford exit ahead of the current campaign, but he made himself indispensable in the first half of the season, scoring seven of his nine league goals under the former Chelsea boss.

And he has continued to look the part under interim manager Ole Gunnar Solskjaer, much to the delight of Deschamps.

"It's always difficult to know what will happen, but all players can have periods when they are less successful on the pitch," Deschamps said at the Laureus World Sports Awards in Monaco.

"It's certainly related to confidence. It can be related to the relationship they have with their coach. It happens every season, for all players.

"Anthony Martial is back playing at a very, very good level. He's often decisive. He had some physical problems too.

"He is a player who was with us at Euro 2016. He wasn't there for the World Cup, but he is one of the players we regularly follow.

"He is a young player who is growing in maturity, because he started very early at Manchester United and with the French team too.

"There are always difficult moments, but in terms of potential, he has everything you need to be at the highest level."