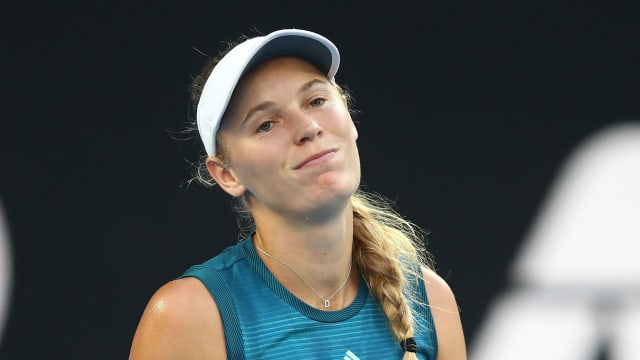 Caroline Wozniacki revealed she has struggled with a viral illness for almost two months after withdrawing from the Dubai Tennis Championships.

The former world number one, who was diagnosed with rheumatoid arthritis before last year's US Open, pulled out of a second tournament in succession and had her place taken in the main draw by Polona Hercog, who was defeated by fellow lucky loser Stefanie Voegele 6-3 6-2.

Elise Mertens, seeded 16th, claimed the biggest title of her career at the Qatar Open at the weekend but she fell to a 5-7 6-4 7-5 loss against Zhu Lin on Monday.

After announcing her withdrawal, Wozniacki explained she has been feeling unwell since Christmas, despite her condition improving after the Australian Open.

"It hasn't been the greatest start, the start that I'd hope for," said Wozniacki. "I picked something up at Christmas at home and it was lingering a bit all the way through Australia and after that I felt good for a couple of weeks. Then I came to Doha and then the day of my match I woke up and I felt terrible.

"When you have RA [rheumatoid arthritis], my immune system is not working on as high of a level as normal so it's taking me longer to get over stuff like this."

Dalila Jakupovic came from a set down to advance past Zarina Diyas 1-6 6-1 6-2 to book a date with Angelique Kerber, while Karolina Pliskova lies in wait for Dominika Cibulkova after the Slovakian triumphed 5-7 6-1 6-2 against Spaniard Lara Arruabarrena, who appeared to be struggling with injury.

It was an emotional match for Jelena Ostapenko as she struggled with her serve, holding just once and committing 11 double faults in a 6-4 6-0 defeat to Jennifer Brady.

The 2017 French Open champion received treatment on her back and appeared tearful both during the changeovers and prior to serving in the second set.

Ostapenko finally held serve from 15-40 in game eight of the first set, but Brady - who will next meet Caroline Garcia, a comfortable 6-2 6-0 winner against Anastasia Pavlyuchenkova - reeled off the next eight games in succession to seal the victory.

Needing to hold to clinch victory in the match, Zhang Shuai started the ninth game of the second set by drilling a serve beyond Kontaveit, only for it to be called out.

However, Kontaveit said it touched the line and gave the point to her opponent. Zhang went on to seal a 7-6 (7-3) 6-3 victory and posted a tweet calling her opponent a "nice and honest girl" for her action.

I have to say the most respect give to @AnettKontaveit , 2nd set 5:3 first point I made an might Ace maybe not , but called was out , my opponent just gave the point to me and says the ball touched line . Nice and honestly girl , good luck next event !! https://t.co/qBJx3iXMze