What we learned from NBA All-Star action 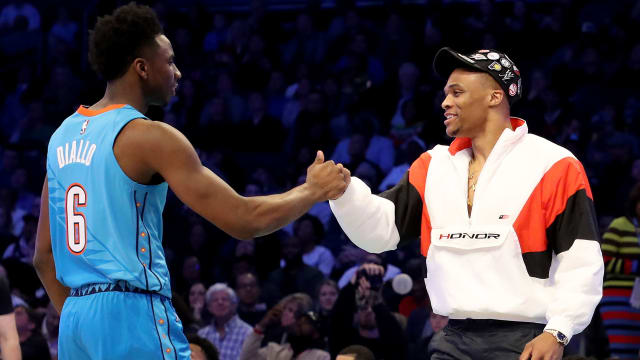 NBA All-Star Saturday Night is fun but it is also something we can learn quite a bit from.

This weekend has been interesting. Young talent was showcased and surprising innovations were made. But there is room for more change.

Here is what we learned from the NBA's All-Star action in Charlotte on Saturday.

So the Skills competition always seems to come down to the final three-pointer to close out the round and several times on the night players who got to the shot first wound up losing because they could not hit that first attempt.

But as the night went on, people were more and more creative. First, it was Atlanta Hawks youngster Trae Young thinking smart as he hit a three-pointer with a runner to beat De'Aaron Fox.

Boston Celtics forward Jayson Tatum was studying everything going on though and he was not going to get beat by the three-pointer in the finals. Against Young, he took a runner — from half-court — to edge out Young for the win.

This challenge is changing before our very eyes.

The NBA All-Star weekend is starting to feel like a showcase for the Brooklyn Nets.

Joe Harris, @StephenCurry30, and @buddyhield compete in a thrilling final round of the #MtnDew3PT contest! #StateFarmSaturdaypic.twitter.com/AVCMFeJHHV

And on Sunday, D'Angelo Russell will make his first career All-Star appearance. Talent is starting to show for the Nets which is probably a pretty good reason why they are in line for a playoff spot with a 30-29 record at the break. The Nets are almost defiantly on the up and up even though few take notice.

It's time to change something with the Dunk Contest

But overall, once again, the Dunk Contest was a bit of a snoozer. We have seen everything these guys have done before and one of the few 50's on the night came on the fifth attempt in the second round by Smith.

The anticipation of the dunks is almost the most exciting part of the night now. Something has to change. Whether it be a different format or simply opening up the contest more (would you not like to see Zion Williamson in the contest this year even though he is still in college?) or even allowing the use of professional dunkers to compete against NBA players, something has to change.

We have seen it all at this point, and to be honest, a lot of people are bored with it. Unless you can give us Zach LaVine and Aaron Gordon again. Absolutely nothing about that was boring.