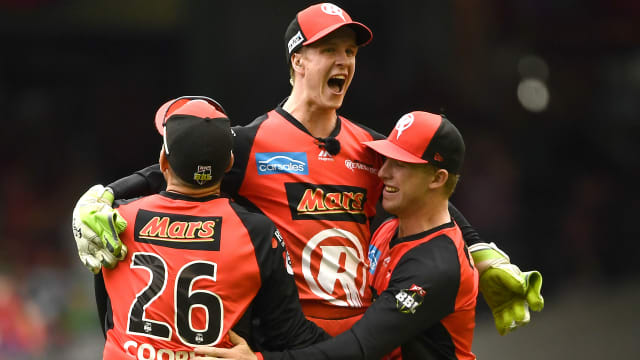 Melbourne Renegades emerged from the jaws of defeat to sensationally win their first Big Bash League title by 13 runs as Melbourne Stars collapsed in dramatic fashion.

Runners-up in 2015-16, the Stars looked to be cruising to their maiden BBL crown at 93-0 in response to the Renegades' total of 145-5 in Melbourne on Sunday.

But the Stars capitulated in remarkable scenes, losing 19-7 in 30 balls as they were limited to 132 runs at Marvel Stadium.

The Stars were cruising with a coveted trophy in their sights - Ben Dunk (57) and Marcus Stoinis (39) settled in the middle.

Dunk hit four boundaries and a six, while Stoinis smashed a pair of fours and a six of his own.

But when Stoinis was bowled out by Cameron Boyce, it all went horribly wrong in one of the wildest chokes seen in the competition.

"If the Stars lose from here, I don't think they'll ever win it," Shane Warne said on Fox Sports with the Stars five down . "It was the unlosable game."

Aside from Adam Zampa (17 not out), no other player reached double figures as Peter Handscomb (0), Glenn Maxwell (1), Nic Maddinson (6), Seb Gotch (2), Dwayne Bravo (3) and Jackson Bird (4 not out) watched the trophy slip through the Stars' grasp.

"For those men in red, they'll sit there and giggle and say 'I can't believe we won the Big Bash Final'," Warne said. "For the men in green, they've got some serious questions they've got to ask themselves. They lost the game through reckless cricket, maybe a bit complacent and some pretty ordinary shots and they'll be a shattered group."

After the stadium was evacuated just hours before the final due to a rogue fire alarm, the Renegades somehow - beyond belief - defended a modest total in the Melbourne derby.

The Renegades were sent in to bat by Stars captain Maxwell, whose side gained the upper hand as they reduced their rivals to 65-5 in the 11th over - Jackson Bird (2-25) and Zampa (2-21) the wicket-takers.

However, Tom Cooper (43 runs from 35 balls) and Dan Christian (38 from 30) put the Renegades back on track with an unbeaten 80-run partnership.

Dan the Man did it all in the #BBLFinal to be the @Dream11 MVP! pic.twitter.com/1SlVG4P6vi

Renegades skipper Aaron Finch was run out at the non-strikers' end and he was seen taking his frustrations out on a chair as he headed down the tunnel.

Then, with the ball, Renegades quartet Boyce (2-30), Chris Tremain (2-21), Christian (2-33) and Harry Gurney (1-20) helped pull off the unlikeliest of victories in their first BBL final appearance.