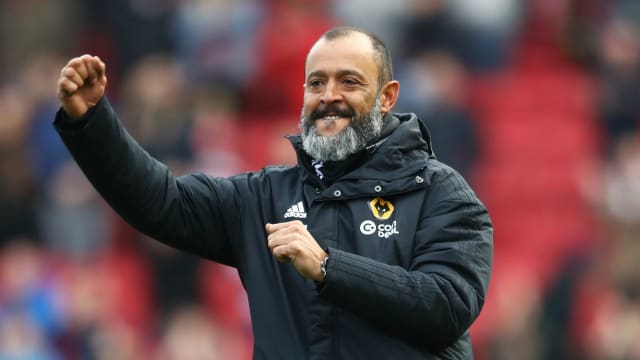 Nuno Espirito Santo hopes Wolves' first FA Cup quarter-final in 16 years will be played at Molineux after seeing his side beat Bristol City 1-0 in the fifth round.

Portuguese forward Cavaleiro was the hero for Wolves in round four, when he scored the winner in a replay victory over Shrewsbury Town, and Nuno said the 25-year-old had given the club's fans a memory to savour.

"It was very tough, but I’m happy for the fans. This was a moment of joy.

"We try to find solutions, but it was hard when they put so many [men] behind the ball and with long balls into the box all the time.

"In the first half they gave us space, we had space and the chances to score, but then they changed it and they are a tough team.

"I would like to play at Molineux [in the next round] if I could ask for something."

Nuno picked out full-back Matt Doherty for praise after he caused City problems all afternoon and provided the assist for Cavaleiro's strike in the 28th minute.

The 27-year-old Irishman was a key part of Nuno's promotion-winning side last season and has continued to thrive since the club rose to the Premier League.

"He has a big heart," said the Wolves boss. "He goes up and down, he doesn't rest.

"It's a tough job but he keeps on running. We are very happy with him.

"Last season he did a fantastic season and it was a big challenge to prove himself in the Premier League and he's doing so well."

Wolves captain Conor Coady praised his team-mates for the way they resisted Bristol City's attempt at a second-half comeback, saying: "People think because you're a Premier League team you should come here and turn them over but it's different. They're a tough team, it's a really good club.

"I thought we dominated the first half and we knew there was going to be a reaction in the second half. They did, but we stuck in there and showed how we can defend."