Muguruza and Kasatkina battle their way into Dubai second round 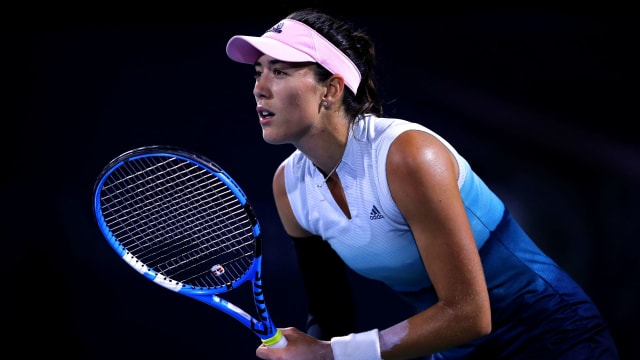 Garbine Muguruza was among the winners at the Dubai Tennis Championships on Sunday while 2018 runner-up Daria Kasatkina also advanced to the second round.

Kasatkina, beaten by Elina Svitolina in the decider 12 months ago, did not have things all her own way against Magdalena Frech and neither did Muguruza against Dayana Yastremska, to whom she has already lost this year.

Day one of the Premier 5 hard-court event saw a stunning comeback from Aliaksandra Sasnovich while there were also wins for Kristina Mladenovic, Viktoria Kuzmova, Lesia Tsurenko, Belinda Bencic and Eugenie Bouchard.

ONE MATCH AT A TIME FOR MUGURUZA

Muguruza looked in danger of a third successive defeat to Yastremska when she dropped the first set to the Ukrainian, before fighting back strongly to seal a 4-6 6-3 6-3 victory on her seventh match point as her opponent sent a return wide.

The Spaniard, seeded 12th, advances to a second-round meeting with Zheng Saisai, who overcame Ajla Tomljanovic 6-2 4-6 7-5, and the two-time semi-finalist knows the Chinese will provide a stern test.

"I love coming here, it's such an entertaining tournament. I did well in the past so it's always good to be back," Muguruza said. "She [Yastremska] was playing very well the previous two times, she played better today but I managed to increase my levels and win.

"I've certainly been kind of close, but that [the title] is very far away, come on it's only the first round, I don't want to think about that yet. I played her [Zheng] also recently, every match here is very difficult, it's such an important tournament and I'm ready to fight."

On her seventh match point, @GarbiMuguruza cracks the code to earn her first career win over Dayana Yastremska 4-6, 6-3, 6-3 in the first round at @DDFTennis. pic.twitter.com/iGomnxIJTy

Kasatkina was pushed hard by Frech before prevailing 6-3 3-6 6-4 and the Russian hopes a return to Dubai will kick-start a season that has yielded only one prior victory - a walkover following Maria Sharapova's withdrawal in St Petersburg.

"It was a very tough match with long rallies, we played more than two hours so I'm a little bit tired but happy I won," she said in her on-court interview. "I'm not playing my best tennis at the moment but I'm hoping this match will give me confidence and I'll correct this crisis.

"Yesterday I came here, there was nobody in the stadium and I just sat there [in the stands] with my friend and reminded myself of some memories of last year and I'm happy to come back here."

Frech made it really tough for her, but @DKasatkina comes through, 6-3, 3-6, 6-4!@DDFTennispic.twitter.com/K7zWhjqcPb

SASNOVICH BACK FROM THE BRINK

The comeback of the day undoubtedly belonged to Sasnovich, who pulled off a remarkable turnaround to defeat Ekaterina Makarova.

Sasnovich suffered the ignominy of being bagelled in the opening set and the writing appeared to be on the wall when she was broken for a second time in the second set to fall 4-1 behind.

But remarkably, the Belarusian won six of the next seven games - including three breaks of her own - to force a decider, where both players showed frailties on serve before Sasnovich eventually prevailed 0-6 7-5 6-4 to set up a meeting with Hsieh Su-wei, who knocked out 10th seed Anastasija Sevastova 6-4 6-2.