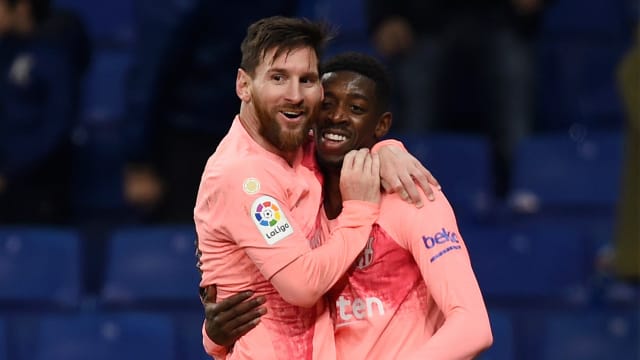 Lionel Messi is the perfect team-mate in attack because of the extra opposition attention he occupies, according to fellow Barcelona star Ousmane Dembele.

Argentina great Messi and France forward Dembele have struck up a successful understanding in the latter's second season at Camp Nou, sharing 43 goals between them in all competitions.

The former Borussia Dortmund man is beginning to plug the hole left by Neymar, who departed for Paris Saint-Germain in 2017 due to a reported desire to break free of Messi's shadow.

Dembele, in contrast, is more than happy for his captain to retain the burden of responsibility.

"I give him the ball and he does incredible things. When he's on the pitch it's easier for a forward, because the rivals focus mainly on him."

Messi and Dembele will both have big roles to play when the Blaugrana visit Lyon in the first leg of their Champions League last-16 tie on Tuesday.

Ex-Rennes winger Dembele warned: "They're a team with very good players and it's very difficult to win there.

"They demonstrated this season - winning against City and PSG - that we will have to be very attentive and not think that the game will be easy.

"[Nabil] Fekir - suspended for the first leg - is their best player, but there are other players who have great qualities, and we'll have to watch everyone.

"I look closely at their Ligue 1 matches, and I play alongside some of their players in the French national team like Fekir, [Ferland] Mendy or Moussa Dembele. They are dangerous all over the pitch."

Barca remain in the hunt to win the treble and Dembele encouraged his team-mates to fight on as many fronts as possible.

"We have to be focused on our goals," the 21-year-old said. "We want to win titles, win the Champions League and also the league, of course!"