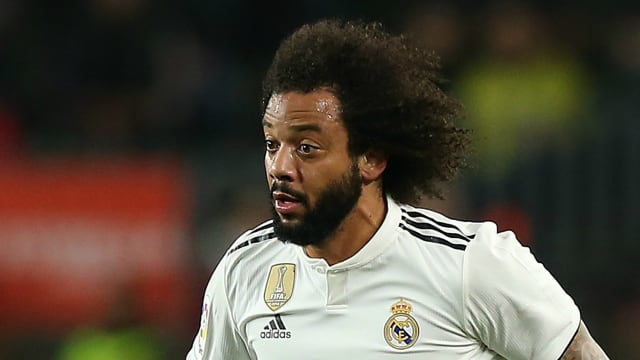 Marcelo has come in for criticism after a series of poor performances this season and he once again struggled against relegation-threatened opponents on Sunday.

Although squad rotation saw the Brazil international start the clash with Girona, Marcelo has hinted he may seek a move away from Madrid at the end of the season after losing his place to Sergio Reguilon.

Madrid have won only 38.5 per cent of LaLiga games Marcelo has started this term, compared to 81.8 per cent when Santiago Solari has left him out.

Eusebio appeared to target the defender during the second half by switching Portu from the left wing to the right, with the attacker heading in the winner after Cristhian Stuani's penalty had cancelled out Casemiro's opener.

However, the Girona boss - who had lost his seven previous encounters against Madrid in league action - insisted it was not a deliberate ploy.

"I respect the rival players a lot and someone like Marcelo is an institution," he told a news conference.

"Portu plays on the right and generates a lot of problems, but this time he did on the left.

"Pere Pons was forced [to come off], he was dizzy and it was a big risk to continue in the field after the blow he suffered.

"We were subdued and with [Anthony] Lozano we gained more depth, we thought we could create more problems."

100% - Of players to have scored each of the penalties they have taken in @LaLigaEN since the turn of the 21st century, Girona's Cristhian Stuani has scored more than any other player in the competition (13/13). Lethal. pic.twitter.com/nKili9QyKI

Eusebio was reportedly close to the sack with Girona having lost six games in a row in LaLiga to slip towards the relegation zone, but their upset victory sees them move to 15th in the table.

"They could have made us more goals in the first half, but in the second half we had more control," he added.

"We made them less comfortable and the match was indicating that we were better. Their advantage was minimal and in the second half we were superior, we scored two goals and that's why we deserved to win.

"They dominated in the first half, but being 1-0 only made us believe and we tried to take the initiative away from them, we wanted to make them run with the ball, they are three very important points, and achieving the goal depends on us.

"It's a very happy day, we have won the prize for the work that is done every day. The prize did not arrive and it has arrived today. Very happy because they are three important points, we must continue working with that spirit."