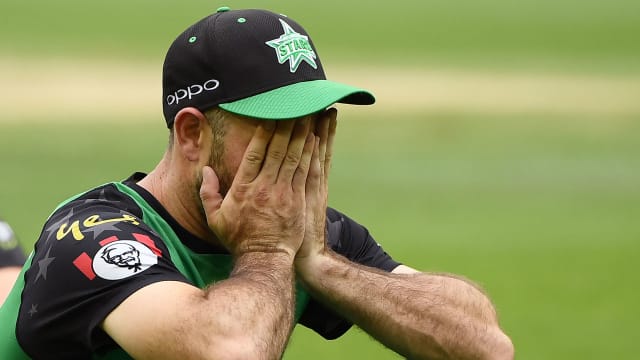 Seeking a maiden title, the Stars looked firmly in control of Sunday's decider at Marvel Stadium, reaching 93-0 towards the end of the 13th over in a chase of 146.

But a stunning collapse saw Maxwell's side lose seven wickets for just 19 runs in less than five overs as the Renegades completed a sensational turnaround to seal victory by 13 runs.

The Stars have reached the play-offs in all but one of the eight Big Bash seasons, and Maxwell hopes to use this latest disappointment to spur the side on and finally lift the trophy in 2019-20.

"This will probably drive us next year and we'll use it as motivation to go one step further," he said.

"We were so close, with eight overs [to go] we probably looked like winners. To fall that short is disappointing and it's hard to take.

"I'm sure once the dust settles and we get back to next year, we'll be able to put some more performances on the board with some more squad depth.

"I think those first 10 overs – we batted beautifully but I think we could have gone a bit harder, knowing what we had behind us.

It's not over yet though! #BBLFinalpic.twitter.com/tFR0I1oWj3

Maxwell insisted he had no regrets about opting to field having won the toss, after opposite number Aaron Finch said his choice would have been to bat first.

"With the way the game was going, the way they were throwing the ball into the ground and getting the ball soft, it was always going to be hard for a new batter [in the chase]," said Maxwell.

"You could sort of feel that on the boundary, we probably needed to kill the game a bit earlier, go a bit harder when the ball was hard and just get ahead of the rate.

"They bowled pretty well and kept us around seven and a half an over. As soon as you lose a wicket, that can really skyrocket as we saw it tonight.

"That's probably the way we would have gone about it [in the field] – we wouldn't have been too concerned with a team being none down, especially [as] we didn't really get away at any stage."