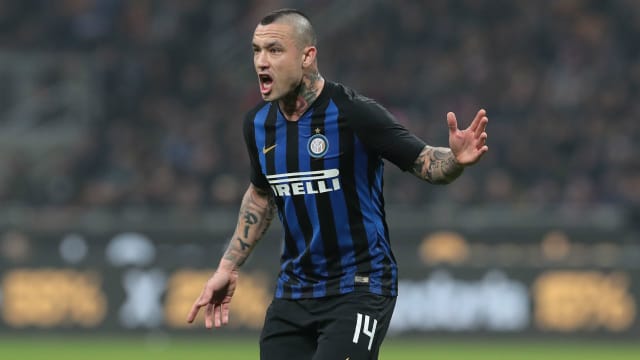 Radja Nainggolan came to Inter's rescue in Mauro Icardi's absence to seal a dramatic 2-1 victory over Sampdoria in Serie A on Sunday.

Icardi, who was this week stripped of the captaincy amid ongoing speculation over his future, watched from the San Siro stands due to the knee injury that kept him out of the 1-0 Europa League victory over Rapid Vienna on Thursday.

Inter looked set to rue his absence until Danilo D'Ambrosio opened the scoring in the 73rd minute, but substitute Manolo Gabbiadini pounced on some shoddy defending just 25 seconds after coming on to pull Sampdoria level.

However, Nainggolan's shot from the edge of the box found a path through a host of bodies three minutes later to restore the Nerazzurri's four-point cushion over fourth-place AC Milan.

Lautaro Martinez, who scored Inter's goals in back-to-back wins over Parma and Rapid, led the line in Icardi's absence and was kept off the scoresheet by Emil Audero in the sixth minute.

Audero had to scramble back to stop a tame Ivan Perisic shot that squirmed through his legs crossing the line, while Milan Skriniar saw a goal ruled out for offside against D'Ambrosio in first-half stoppage time.

Samir Handanovic stayed on his feet to deny Gregoire Defrel just 32 seconds after the restart and the newly appointed captain produced a fingertip save to keep Fabio Quagliarella's looping header out in the 66th minute.

Perisic was unperturbed by seeing a shot saved by Audero and his run into the box from the left enabled D'Ambrosio to dart in front of Nicola Murru for the opener.

Gabbiadini punished Skriniar's failure to clear the ball with his first involvement after replacing Riccardo Saponara in the 75th minute, but Sampdoria were unable to hold on for a point.

Nainggolan somehow found the bottom-left corner with Audero unsighted to seal an important win that enabled Inter to strengthen their grip on third.

Goals from @ddambrosio and @OfficialRadja secure a win for the Nerazzurri despite Gabbiadini momentarily bringing Sampdoria level!

What does it mean? Martinez cannot be relied upon

While he may have proved key to the victories over Parma and Rapid, Martinez displayed he is not yet a clinical striker capable of snaffling any chance that comes his way. He failed to best Audero with his first chance and it proved to be his only shot on target in the entire match. Icardi may have scored just twice in his last 11 Serie A appearances, but Martinez does not appear ready to spearhead the attack on his own.

Having been rested for the meeting with Rapid on Thursday, Brozovic looked fresh in central midfield. He laid on a team-high six chances and regained possession seven times - Stefan de Vrij was the only Inter player to do so on more occasions - to help the Nerazzurri keep the visitors under pressure.

By failing to clear inside his own box - a hack at the ball rebounded off Joao Mario - Skriniar gave away Inter's lead, with Gabbiadini outmuscling him and firing into the bottom-right corner. He was fortunate Nainggolan was on hand to bail him out.

- Inter have scored two goals in a single Serie A game for the first time since December against Roma.
- Inter have not conceded a goal in the first half for the 20th time this season: more than any other team in Serie A in 2018/19.
- Inter have scored 41% of their goals (14/34) in the last 15 minutes of play: the highest percentage in Serie A this season.
- Danilo D’Ambrosio scored after 11 Serie A games without a goal.
- Radja Nainggolan scored after eight Serie A games without a goal.

Inter will hope to secure a place in the last 16 of the Europa League when they host Rapid on Thursday, while Sampdoria are not in action until a home game against Cagliari next Sunday.