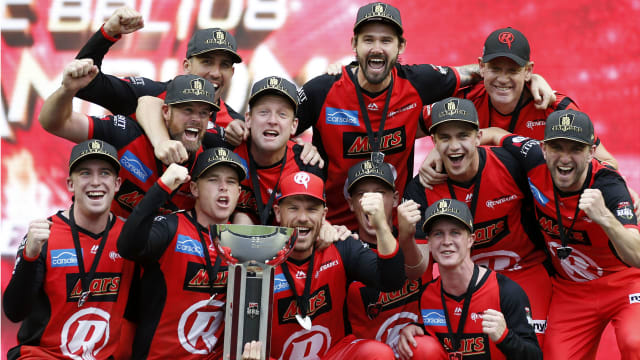 Melbourne Renegades captain Aaron Finch says his side stuck to their strengths as they pulled off a remarkable comeback against the Melbourne Stars in the Big Bash League final.

Runners-up in 2015-16, the Stars looked to be cruising to their maiden BBL crown at 93-0 in response to the Renegades' total of 145-5 in Melbourne on Sunday.

But a stunning capitulation saw them lose seven wickets for 19 runs in 30 balls, eventually finishing on 132-7 at Marvel Stadium.

"It's exciting, very special," said Finch, who managed only 13 with the bat. "Our boys were fantastic. I didn't do a hell of a lot to be fair, it was the guys who executed with bat and ball.

"We knew batting first it was going to be so hard to chase any total, you can defend anything. We stuck to our strengths and you just need one little opening, especially in a final with the pressure on."

Player of the match Dan Christian - previously a winner of the BBL with Brisbane Heat - followed up an unbeaten 38 with bowling figures of 2-33, as well as a pair of catches. He added: "I wasn't expecting that to be honest, an awesome game from everyone.

"The bowlers stuck to it all the way. I was lucky to parachute in at the end.

"This is right up there, let's say it's the best one! We spend a lot of time together, a great bunch of blokes."

Despite throwing away their chance at the title, Stars captain Glenn Maxwell was full of praise for his players.

"Extremely proud, we played some great cricket this tournament," he commented. "To fall short at the end is disappointing.

"Hopefully we'll win it next year. Great support, they've been brilliant for us.

"Congratulations to Renegades, we've had some great tussles.

"To my boys, I've asked a lot of you and you've delivered in spades."