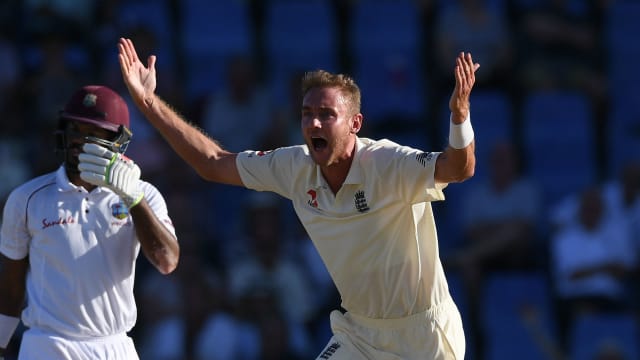 Stuart Broad believes recent events indicate sledging will be less of a factor in the 2019 Ashes between England and Australia.

The five-match series begins at Edgbaston on August 1 and Broad expects the tourists to be on their best behaviour as Australia continue to rebuild their reputation following last year's ball-tampering scandal.

But the bowler also pointed to the actions of Joe Root last week, the England skipper earning praise for challenging a comment from West Indies bowler Shannon Gabriel.

"If the stump mics had been turned up in 2017-18, the umpires would have been a lot busier than they have been this week, the way the Australians went about their business," Broad wrote in the Daily Mail.

"I don't think it will be an overly verbal series this summer because Australia will be under pressure to maintain their new culture of behaviour, and the kind of guy their captain Tim Paine is, I am not sure he would stand for too much nonsense.

"As we have seen this week, Joe Root doesn't either and we saw great leadership from him on the field. It wasn't a set-up, he wasn’t told to say that. Those were his natural emotions coming out."

England avoided a whitewash with a 232-run win in the third Test against West Indies last week and Broad is bullish about the team's Ashes chances on home soil.

"We know it will be fiercely competitive for sure, that they have a strong team and it will arguably be stronger with players like Steve Smith and David Warner coming back," he added.

"But we know we're a good team and we got back to our strengths this week, with the return of our engine room of Ben Stokes, Jonny Bairstow and Moeen Ali at numbers six, seven, eight, and Joe Root coming into the runs at a good time for us.

"I would imagine we will go in as favourites. Australia haven't won an Ashes series in England since 2001 and it's really tough to win away from home these days.

"India came to us last year as the world's number one Test team and lost 4-1, then went to Australia and won. Winning away from home is tough and we have to make it as hard for the Australians as we possibly can.

"The first Test is in Birmingham and that means it’s going to be lively. It's one of the best atmospheres we get and I don't think those in the Eric Hollies Stand are going to allow Smith and Warner to return quietly."