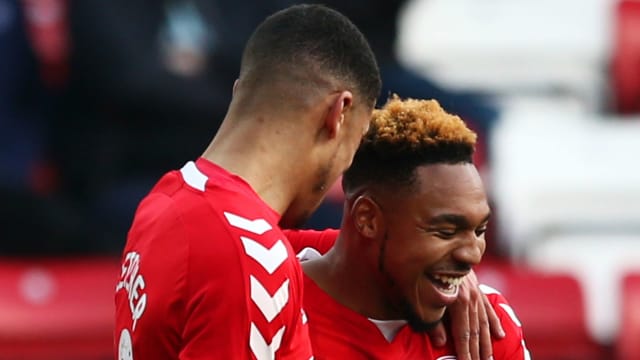 Victory sends Tony Pulis' side into fifth, with a three-point cushion over seventh-place Derby County in the race for a top-six finish and a spot in the play-offs.

Boro will still harbour hopes of automatic promotion - sitting seven points behind second-place Sheffield United, over whom they have a game in hand - while for Rovers, Sunday's defeat at Ewood Park was their fourth on the bounce and leaves them 14th.

The visitors took the lead in the 19th minute when Charlie Mulgrew misjudged a long pass from the back and, although he recovered to slide in and block Ashley Fletcher's effort, succeeded only in diverting the ball towards Assombalonga to nod home his 10th league goal of the season from point-blank range.

And it was a second Mulgrew mistake that led to Williams' sending off prior to the interval, the centre-back misreading another ball over the top before his fellow defender brought down Fletcher on the edge of the box and received a straight red.

Lewis Wing thumped a 25-yard strike off the crossbar shortly after the restart as Pulis' men sought a second and they ought to have been undone by former Boro striker Danny Graham, who could only skew an attempt over from six yards with 12 minutes remaining.

Graham teed up Bradley Dack five minutes later, but the midfielder's first-time volley was superbly saved low to his right by Darren Randolph as Boro held on for all three points.