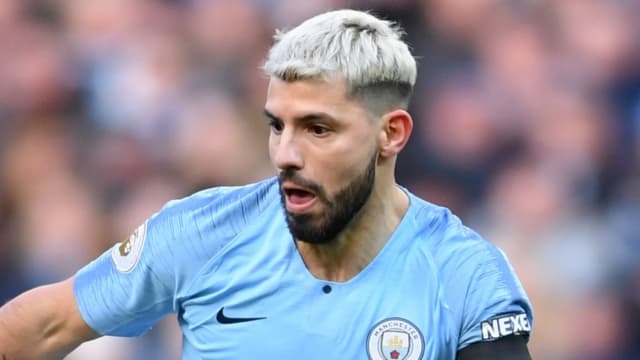 Sergio Aguero feels Manchester City have "the capacity to win everything" and backed his team-mates to make history by winning four trophies this season.

Pep Guardiola's men returned to the top of the Premier League table after they strolled to a 6-0 victory over Chelsea, and they subsequently avoided an FA Cup upset by beating Newport County 4-1 in the fifth round on Saturday.

Ahead of a week in which City travel to Germany to face Schalke in the Champions League and then to Wembley to play Chelsea in the EFL Cup final, Aguero had his sights set on winning everything.

"If you get to this stage in the season with a chance to win four titles it means you are doing well," the Argentine striker told The Mirror.

"And I wish it would happen. I'm ­ambitious and you have to aim high.

"I know that nobody has ever done it before and I would like us to go down in history. For me, too, I want to be the one who scores goals in all the finals.

"I see this City team as having the ­capacity to win everything – and so that is our challenge."

A stunning start to 2019 for @aguerosergiokun, your @etihadairways Player of the Month!

Aguero's treble against Chelsea drew him level with Alan Shearer's record of 11 Premier League hat-tricks and took his goal tally for the campaign to 17 in 23 appearances.

At 30 years of age, the question of whether Aguero will finish his career at City or return to his homeland continues to surface but the club's record goalscorer said he has no plans to leave.

"City are a champion team with a champion coach," he said. "What else am I going to want?

"I'm very happy at City and for now I don't even think about leaving.

"It's a great club that always looks after its players. I saw it from the very first day I arrived and it’s continued ever since.

"I still don't know what I will do when I finish ­playing, but I will continue in the football world, that's for sure.

"For now I just dream of winning titles with City every season, that is my main challenge."