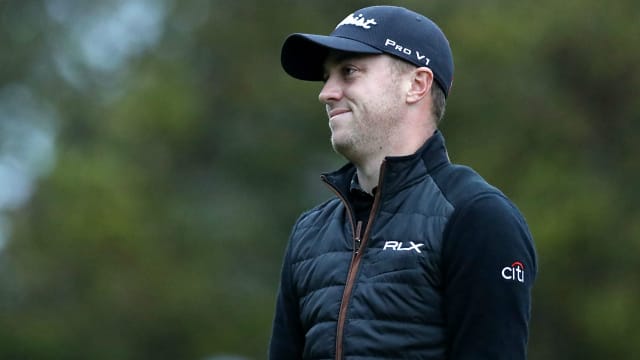 Justin Thomas ended Saturday at the top of the Genesis Open leaderboard before darkness suspended the rain-hit PGA Tour tournament.

Thomas was one-stroke clear and through two holes of his third round when bad light forced players off the course in Palisades, California.

Trying to make up for lost time due to rain delays, golfers took to the Riviera Golf Course earlier on Saturday morning and played well into the evening.

No golfer finished their third round, with Adam Scott a shot behind Thomas and through two holes ahead of the resumption of play at 09:00 local time on Sunday.

Round 3 resumes at 6:45 a.m. PST. pic.twitter.com/ITdrJqFTjn

Thomas and Scott both completed six-under-par 65s in the second round on Saturday, having finished the remaining six holes of that round.

American veteran Tiger Woods, who made the cut with one hole to spare, fired off three birdies and one eagle in a shortened round to be six under.

The 14-time major champion was through seven holes of his penultimate round having started birdie-eagle-birdie-birdie, while Dustin Johnson (through nine) is three under.

@TigerWoods has started Round 3 of the @GenesisOpen 3-3-3.

Phil Mickelson, who is coming off victory at the AT&T Pebble Beach Pro-Am, sits in 48th position at one under following the completion of six holes.

Mickelson started well with an eagle but carded two bogeys before the day was over.