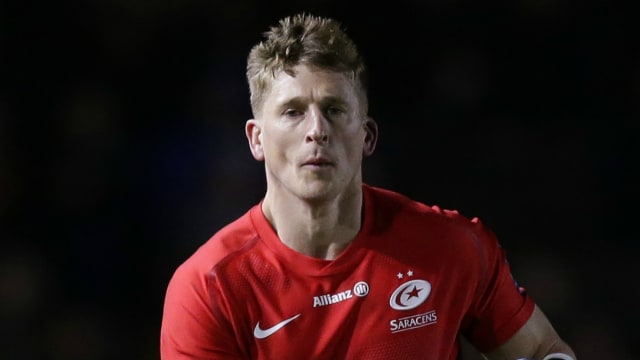 Saracens capitalised on Exeter Chiefs' slip by sealing a late bonus-point win over Leicester Tigers to go top of the Premiership, while Northampton Saints hammered Sale Sharks in Saturday's action.

The Chiefs lost for just the third time this season against Gloucester a day earlier and Sarries ran in 28 unanswered second-half points at Allianz Park to defeat the Tigers 33-10 and reach the summit on points difference.

It was not all plain sailing for the home side, who trailed 10-5 at the break, with Jonah Holmes crossing just before the break for the Tigers after Richard Wigglesworth's score for Sarries.

But the champions stepped up a gear after the break and Tom Woolstencroft went over before late tries from Ben Spencer and David Strettle gave Sarries a full haul.

Northampton, who saw Dan Biggar limp off after 19 minutes, were in rampant mood in their 67-17 rout of Sale, as the Saints ran in nine tries to end the Sharks' five-match unbeaten Premiership run.

Cobus Reinach had scored twice by the time Tom Wood and Tom Collins dotted down either side of a penalty try for Sale.

And there was little respite after the break as Ahsee Tuala, Taqele Naiyaravoro, George Furbank, Rory Hutchinson and Collins added second-half tries.

That was a little bit good

After the match, Northampton boss Chris Boyd said Biggar was taken off as a precaution in welcome news for Wales in their Six Nations bid.

"We removed him and he probably could have played on," he said in quotes reported by BBC Sport.

"He came back from Italy with a really, really low-grade MCL strain in the knee and was keen to play and he didn't train on Tuesday and he trained on Thursday and trained really well and felt really comfortable.

"But he just caught it again and that was precautionary."

Harlequins went back third in the table after defeating struggling Worcester Warriors 47-33 in a high-scoring encounter at The Stoop.

Newcastle Falcons remain rock bottom, though, after going down 30-13 at Bath.