Mertens fights back to defeat Halep for her biggest WTA title 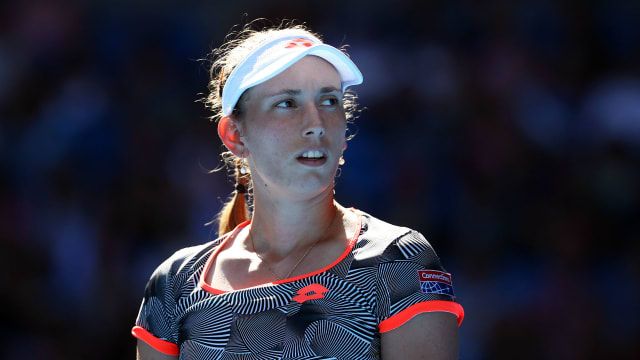 Elise Mertens produced a brilliant comeback to defeat Simona Halep 3-6 6-4 6-3 and claim the biggest title of her career at the Qatar Open on Saturday.

Former world number one Halep appeared destined to put last-16 exits at the Sydney International and the Australian Open behind her when she went a set and a break up, but Mertens showed tremendous resilience to battle back.

The unseeded Belgian saved 11 of the 17 break points she faced and won against serve three times in the decider to seal her first WTA title of the year, while Halep's wait for a taste of silverware in 2019 continues.

Mertens' victory capped a phenomenal week in which she beat three top-10 players, having defeated Kiki Bertens and Angelique Kerber in the quarter-finals and semi-finals respectively.

"I wanted to lift this trophy badly but I couldn't and Elise deserves it very much," said Halep.

A high-quality start to the match saw an exchange of breaks before the Romanian quickly moved through the gears and made a further gain to love with a series of powerful returns.

The top seed made it five games in succession when Mertens overhit a cross-court forehand, but she buried a shot into the net to immediately relinquish her advantage.

Mertens' progress was checked by a medical time-out, feeling an issue in her back, but she levelled the set at 2-2 and produced a lovely backhand pass down the line to take the match the distance.

Halep took time for medical attention to her right foot before the third set and she looked visibly fatigued as Mertens denied her on three break points to move 2-0 up.

The Romanian broke back but was soon struggling again and Mertens was crowned champion when her opponent drilled a double-handed backhand into the net.