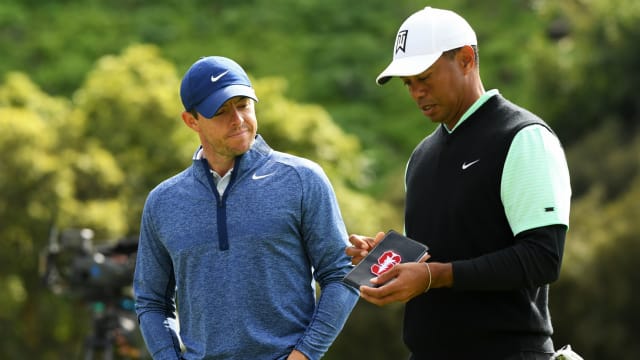 Rory McIlroy surged up the Genesis Open leaderboard by completing a sublime second-round 63 on Saturday, while Tiger Woods looked to have done just enough to make the cut.

Inclement weather earlier in the week at Riviera Country Club has wreaked havoc with the schedule, pushing the completion of the second round back into day three.

McIlroy, one over after his opening 18 holes, made up for lost time with a bogey-free eight-under round.

The Northern Irishman was tied fourth, four back of co-leaders Justin Thomas and Adam Scott, who were among those to have already completed round two. Thomas and Scott both followed up scores of 66 with 65s to share first place. J.B. Holmes was nine under for the tournament having played 14 holes, while a number of players were still in the early stages of their second rounds.

Woods – who along with McIlroy and Thomas was halted after 12 holes on Friday –  scrambled for a level-par 71, leaving him one under for the tournament and one stroke above the projected cut line.

The 14-time major winner made a priceless birdie at the ninth hole - his 18th - and he was confident that would keep him around for the remainder of the weekend.

For a chance to make the cut.@TigerWoods knew he needed this one.#QuickHitspic.twitter.com/E3eW6BYkCQ

"I know one under is getting in," said Woods.