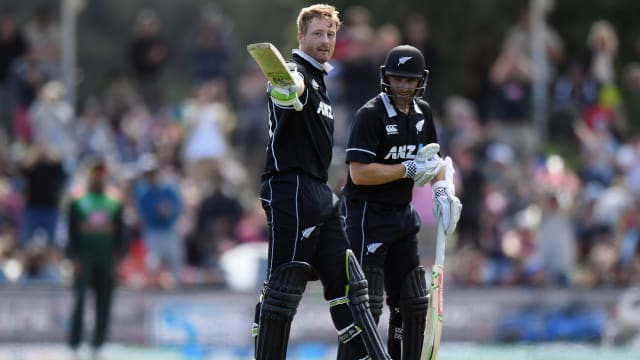 Martin Guptill led New Zealand to an eight-wicket win over Bangladesh to seal a one-day international series victory on Saturday.

Guptill (118) helped the Black Caps reach their target of 227 comfortably at Hagley Oval in Christchurch.

Kane Williamson made an unbeaten 65 as New Zealand won the second ODI to take a 2-0 lead in the three-match series, getting to their target in the 37th over.

Bangladesh earlier struggled in cloudy conditions, fighting to 226 all out after being reduced to 93-5 despite some poor fielding by the hosts.

A brief rain delay in the fifth over slowed New Zealand down, but the tourists were quickly in massive trouble, Matt Henry (1-30) trapping Tamim Iqbal (5) lbw.

Many better sights than Matt Henry in full flight?! He's picked up the wicket of Tamim Iqbal LBW. Watchful start from @BCBtigers 32/2 | 10 overs

But the hosts endured some difficulties in the field, dropping several catches, including Ross Taylor putting down Mushfiqur Rahim and Mohammad Mithun.

Taylor did hold onto a chance from Soumya Sarkar (22) off the wayward Colin de Grandhomme (1-25), while Mushfiqur (24) and Mahmudullah (7) fell relatively cheaply.

The drop off Mithun did hurt the Black Caps as he made 57 having been put down on five, although he suffered a hamstring injury during his innings.

Sabbir Rahman (43) and Mithun combined for a 75-run partnership that helped Bangladesh steady, but their total never looked enough, particularly after Guptill made another flying start.

Coming off an unbeaten century in Napier, Guptill helped the Black Caps make a good start alongside Henry Nicholls (14).

Guptill and Williamson then put on 143 for the second wicket, ensuring New Zealand's victory was never in doubt.

The hard-hitting opener notched his 16th ODI century – the equal second most for the Black Caps – before falling to Mustafizur Rahman (2-42), the hosts sealing a series win before the final match in Dunedin on Wednesday.

There it is! Martin Guptill brings up his 16th ODI century equalling the number Nathan Astle scored in his career. This effort from Guptill off just 76 balls. Superb!#NZvBANpic.twitter.com/ZPXC6Y4Gae