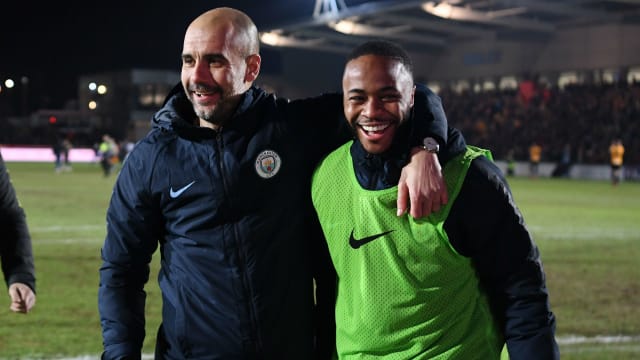 Pep Guardiola felt his Manchester City players "showed everybody how incredible they are" as they beat Newport County 4-1 to reach the quarter-finals of the FA Cup.

The Premier League champions were unable to find a breakthrough in the first 45 minutes at Rodney Parade and could even have fallen behind to their League Two opponents despite dominating possession.

However, Leroy Sane broke the deadlock six minutes into the second half and a flurry of late goals saw Phil Foden score twice either side of Padraig Amond's strike, before Riyad Mahrez added a fourth for City.

Guardiola told BT Sport: "It was a real tough game. We believed it was done [at 2-0] and then they scored, which is typical of this sort of game.

"Then Phil scored an incredible third goal and they softened in the last few minutes.

"My players showed everybody how incredible they are. I have a big compliment for all the guys today who played.

"The first 15 to 20 minutes was difficult. They were better than us in long-ball situations, but in the second half we adjusted with some movement."

FT | @ManCity book their place in the quarter finals but what a cup run from @NewportCounty! pic.twitter.com/ZpWVy2irWO

Newport, who are 15th in England's fourth tier, put in a superb display against their illustrious visitors and Guardiola added: "I was really impressed. The home crowd was amazing. I am surprised they are in the position they are.

"Here I realised English football better than ever and why the cup is special for a team in those conditions - they use their strength points and that's why the cup always has big surprises."

Next up for City is the first leg of their Champions League last-16 tie against Schalke, before an EFL Cup final meeting with Chelsea next Sunday.

"We are still in four competitions and we accept all the challenges," said Guardiola. "Today it was League Two and in four days we play on the biggest stage. We have to change mentality."

"The big mistake is believing you are better than the other ones. Look at what happened between [Manchester] United and PSG, and also Ajax having an incredible game against Real Madrid."

Newport boss Mike Flynn said: "It's no disgrace to lose to City, no matter the score. I said to the lads, 'I'm so proud of you, you deserve all the plaudits.'"