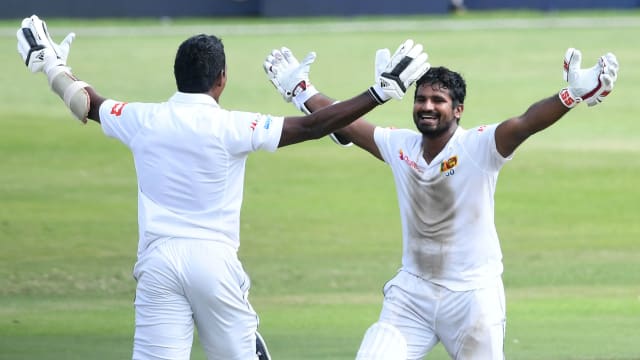 Kusal Perera deserves all the praise that comes his way for steering Sri Lanka to an unlikely opening-Test win for his "Superman" effort with the bat, said losing South Africa captain Faf du Plessis.

Sri Lanka appeared to be on a hiding to nothing in Durban when, chasing 304 for victory, the tourists fell to 226-9 from 83-3 on day four.

But Perera, on 86 at that point, produced a masterclass for the ages and his unbroken stand of 78 with Vishwa Fernando – a record 10th-wicket, fourth-innings partnership for a winning side in Test cricket – steered Sri Lanka to a one-wicket triumph.

Proteas skipper Du Plessis concedes his side could do nothing to get Perera, who finished a career-best 153 not out, off strike and recognised the match was a great advert for fans of five-day cricket.

"It was an incredible game of cricket. We're very disappointed to end on the losing side, but to have it to go down to nine wickets and a 78-run partnership at the end is great for the game of Test cricket," he said.

"You could tell the fans were excited about it and, I suppose, as fans, that's the kind of Test match you want to see.

"Well played to Sri Lanka. Obviously Perera was unbelievable. It took a Superman effort. He deserves all of the accolades that will come to him after this game."

"Great effort as a team, specially the lower order batsmen. They gave me good support. I believed myself, and we did it. Still I am thinking I did my part. This is really special win for us. We did a lot of homework, a lot of hard work."
- Kusal Perera, MoM #SensationalKJP#KJPpic.twitter.com/R7hc6kzGJI

Du Plessis admitted that the manner of the defeat was a tough one to take.

"I'd be lying if I said there wasn't emotions going through me on the inside. The legs underneath the water paddling, a little bit of that. It's difficult for a captain," he added.

"You want to protect a lead and then you also understand that you want to try to bowl at the tailender.

"He played that beautifully. Whatever we tried, he still managed to get one away or a boundary away, every over, every over.

"Towards the end, we got a few balls at the tailender but unfortunately there were a few plays and misses."