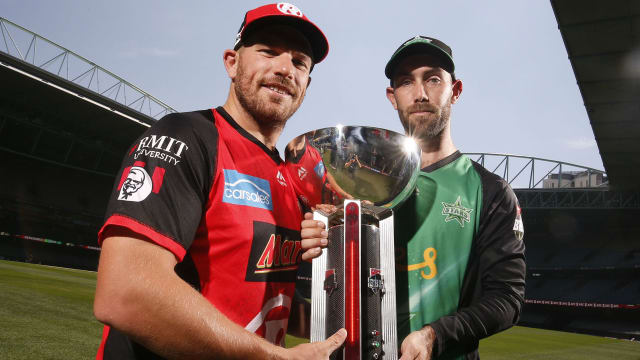 A new Big Bash League champion is guaranteed to be crowned on Sunday when Melbourne Stars face city rivals Melbourne Renegades in a much-anticipated final.

The Melbourne franchises are two of the three teams never to have won the competition, together with this term's regular-season table-toppers Hobart Hurricanes.

Ahead of the final at Docklands Stadium, we look at the best Opta facts relating to the contest.

- Three of the last four BBL finals have been won by the side batting second, with Perth Scorchers (2015 and 2017) and Sydney Thunder (2016) completing successful chases. However, Adelaide Strikers triumphed in last year's decider after batting first against the Hurricanes.

- The Scorchers are the only team to have won the BBL more than once, triumphing in 2014, 2015 and 2017. Prior to this season, in which they finished bottom of the table, they had never failed to make the semi-finals.

- The Stars have also made the last four on seven occasions, including this season, but five of their semi-final appearances have ended in defeat.

- Hobart boast the two leading run-scorers in the 2018-19 BBL, with D'Arcy Short and Matthew Wade contributing 637 and 592 respectively.

- The highest batting average (by a player scoring at least 50 runs) belongs to the Stars' Marcus Stoinis, whose 494 runs have come at 54.9.

- Callum Ferguson is responsible for the highest score in 2018-19, having made 113 not out from 53 balls in the Thunder's victory over the Scorchers on January 24.

- The Renegades' Kane Richardson has been the most prolific bowler in the competition, with 24 wickets. Next come a pair of Sydney Sixers bowlers in Sean Abbott (22) and Steve O'Keefe (21).