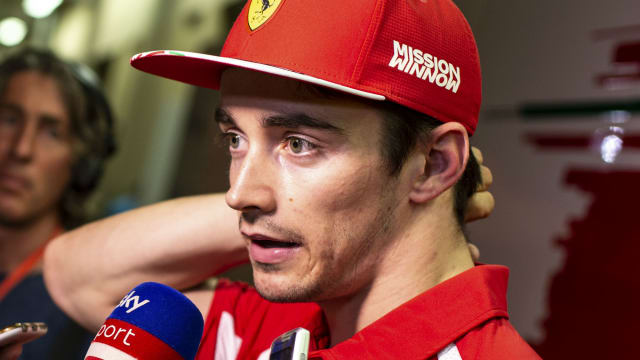 Charles Leclerc insists he will feel no nerves as he lines up alongside Sebastian Vettel at Ferrari this season, seeing only an opportunity to impress.

The 21-year-old is replacing Kimi Raikkonen at the Italian team, leaving Sauber - now known as Alfa Romeo - where the Finn will take his place.

In just his second Formula One campaign, Leclerc will link up with four-time champion Vettel, but he is relishing the chance to race alongside an elite star.

Speaking at the launch of Ferrari's 2019 car, Leclerc said: "I'm not nervous. I think it's more an opportunity for me to be next to Sebastian, who is such a champion.

"I can definitely learn a lot from him. I just see it as an opportunity and I'm pretty sure it will be an amazing season. I think the key will be to work together. I'm sure we will make it."

.@Charles_Leclerc: ‘I prepared the maximum I could during the winter break, physically and mentally’ #essereFerrari#SF90

And seeing the red car he will race this year only increased Leclerc's excitement.

"I'm extremely excited to start this new adventure," he said. "It's a dream since I was a child - I've always been looking at the red car, hoping to one day be in this car. It's a very emotional day for me.

"I've also been part of the Ferrari Driver Academy for some years. That has helped me massively to develop as a driver, with the goal to one day finally have this seat, which is now happening. It's a very proud day for me."

Vettel is certainly confident that Leclerc can help the team, adding: "Charles has been racing his whole life. It's a big step to join Ferrari, but I think also he is very, very excited.

"I'm looking forward to this year. I think the team is on the right path. Hopefully, we can continue improving."