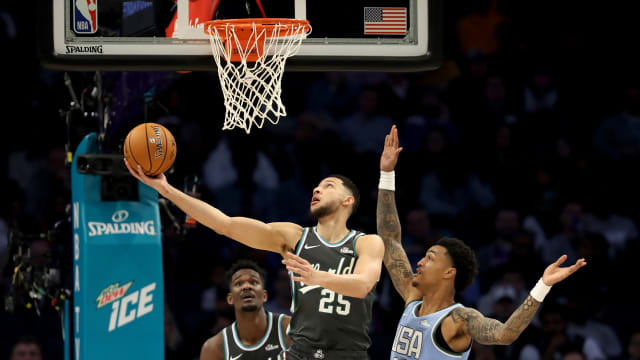 Team World's two-game wining streak is over as Team USA took home a 161-144 victory in the Rising Stars Challenge on Friday.

Kyle Kuzma led all scorers with 35 points and passed Kobe Bryant for the most points ever by a Los Angeles Laker at the game.

Kuzma was named the MVP for his efforts.

Everyone knows Simmons is good. He was nearly an All-Star in his first year, won the Rookie of the Year and was selected to his first All-Star team this season. All this after he was selected as the number one overall draft pick three years ago.

But something we do not get to see a lot of – for good reason – is Simmons going up against smaller guards. Donovan Mitchell drew the unfortunate duty of guarding Simmons early and he gives up seven inches to the Australian. He could not have done much to stop him even if he had tried.

Simmons, while tall, is also quick with the ball and is nearly unstoppable going to the basket if he has a mismatch. Those size advantages he had in the first half led to a nine-of-10 shooting performance from the second-year man.

John Collins was simply showing off in the first half. He was throwing down ridiculous dunks left and right and had the crowd in Charlotte oohing and aahing.

It is easy to see now why he is in the dunk contest.

Despite playing for a bad team in the Atlanta Hawks, Collins has quietly averaged 19.1 points and 9.5 rebounds. He is one of just seven players in the NBA putting up those numbers and is one of only two doing so who was not selected to compete in the All-Star Game.

Collins is more than a dunker, but we honestly cannot wait to see what he has in store for the dunk contest on Saturday.

The Rising Stars Challenge is here to showcase young talent and it always seems like there is a player you have never heard of who lights it up in the game. Last year, it was Bogdan Bogdanovic who won the MVP while hitting three-pointers from Charlotte even though the game was moved to Los Angeles.

This year it was Rodions Kurucs who also sent a message. While you might not be familiar with Kurucs, the second-round pick came out and showed he can hit shots from deep and work inside a bit as well.

He is not a big name yet, but he is a good name to know moving forward.