Kovac: Bayern had Liverpool on the mind against Augsburg 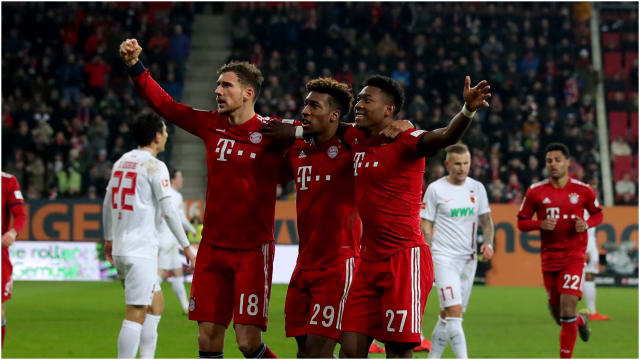 Niko Kovac felt his Bayern Munich side had an eye on an impending trip to Liverpool in their win against Augsburg, but understands their distraction.

Bayern twice had to come from behind at Augsburg in the Bundesliga on Friday, having gone behind after just 13 seconds to a Leon Goretzka own goal.

Kingsley Coman scored two equalisers, although the winger could not complete the game due to an ankle injury, and set up David Alaba for the winner.

Victory moved Bayern two points behind Bundesliga leaders Borussia Dortmund, whose next game is on Monday away to Nurnberg.

Bayern are building momentum and piling pressure on Dortmund but Kovac felt his side did not have their full focus on Augsburg with a Champions League last-16 first leg in Liverpool to come on Tuesday.

"We struggled to get into the game. I can't remember conceding a goal so early, that was very annoying," he told reporters.

"But we took on the fight, especially in the first half. It was more clear-cut in the second half. Taken altogether it was a workmanlike but deserved victory.

"Maybe some of us had Liverpool on their minds, that's possible. It's not good, but human."

Augsburg can take positives from their enthusiastic performance, led by the outstanding left-back Philipp Max, who created both of their goals.

But despite coach Manuel Baum praising Augsburg's display in a spirited defeat to the Bundesliga champions, their fifth loss in six league games will do little for their battle against relegation.

"At the end of the day we're empty-handed," the under-pressure Augsburg coach said.

"But the main point is that 11 players plus subs were out on the pitch and gave it everything.

"We've got a young team, they tried everything and pushed Bayern to their limits. All credit to my team."