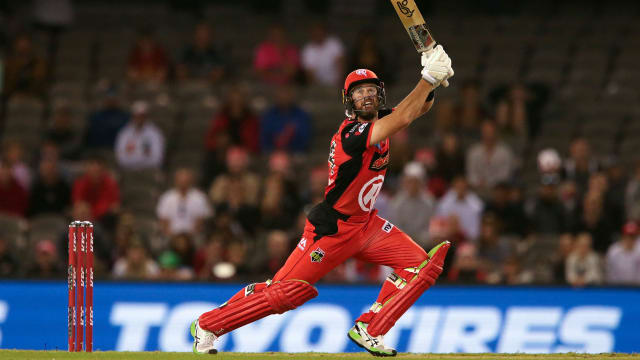 It had looked as though the Sixers had done enough to progress after openers Josh Philippe and Daniel Hughes each hit 52 to help set the Renegades a target of 181.

But that remained in the Renegades' sights throughout and Dan Christian came in at the end to smash an unbeaten 31 off 14, combining with Kane Richardson (9 not out) to get the job done with a ball to spare.

The Renegades will now make their bow in the showpiece contest at home to rivals Melbourne Stars on Sunday.

Philippe smashed a BBL career-best unbeaten 86 in an effortless chase against Hobart Hurricanes last month and it was his turn to set the tone on Friday.

The Sixers closed the powerplay on a handsome 58-0, with Philippe going on to make a 29-ball half-century before his partnership with Hughes was eventually ended at 87 later in the same over as Marcus Harris caught Philippe at long off.

Even with Philippe gone, Sydney looked on course for 200 as Hughes and James Vince (28) swiftly linked up to good effect, though they would fall 20 runs short of that mark.

The Renegades belatedly started to get to grips with their opponents but could only limit the Sixers to 180-3 as Cameron Boyce took 2-33.

In Melbourne's reply, Harris found the boundary from the first ball of the innings and then Sam Harper smashed 36 off 17, yet both departed and further wickets followed - including Cameron White (29), who dragged onto the stumps - just as the Renegades looked to be edging the contest.

A flurry of further dismissals saw Steve O'Keefe (2-22) remove Aaron Finch (44), with 38 runs then required from the final three overs.

The Sixers had no answer for Christian, though. He hit the first of three sixes and then ensured he stayed on strike going into the penultimate over.

Sean Abbott's nerves were evident as he dropped the ball in the run up to his first delivery and Christian again showed why those worries were justified, with two more maximums reducing the target to seven from six balls.

Boyce (11) stepped on his wicket to offer Sydney hope, but Richardson came in with a four, and another boundary from the same man completed a stunning chase as Melbourne reached 184-7.