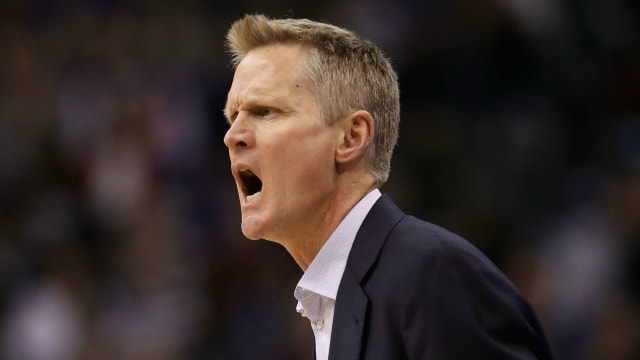 Golden State Warriors stars Stephen Curry and Kevin Durant empathised with Steve Kerr after the head coach was ejected during the loss to the Portland Trail Blazers having thrown a clipboard in response to a flagrant foul call.

Kerr was enraged late in the fourth quarter when Draymond Green was called for a flagrant foul after he stopped Zach Collins from approaching the rim as he went up for a shot.

That drew Kerr's ire and after ranting in one referee's face, he slammed a clipboard down to earn an ejection, with Durant having to escort his head coach back off the court.

The Warriors lost the game 129-107 but will still head into the All-Star break with the best record in the Western Conference.

"It was an emotional game. We fought really hard for 43 minutes," Curry told reporters afterwards.

"One questionable decision - the flagrant - obviously the fire came out. You see coach go and throw a clipboard. At that point you try to get us over the hump. An eight-point swing, it's tough to overcome."

"I looked at the replay and the amount of ball [Green] got, there was nothing excessive about it, he got all the ball.

"There was a lot of chirping, with Zach involved. There was probably a sensitivity to it, trying to put out some fires, but I thought it was a terrible call. We obviously paid the price for it with how everything unfolded after that."

Durant shared that sympathy having been the one to pull Kerr away from the referees as he continued to rant at them.

"I felt for him, I understand his anger and his rage, especially for that call," he said.

"I thought we should have just kept playing, It was a common foul, I thought. Refs looked at it differently.

"I understand why coach was a little frustrated."

Kerr explained that it was the disbelief at the call that had triggered his reaction.

"I was just shocked that that was called a flagrant foul," he said.

"I'm not sure how it's determined - if it's in New York or the officials on the call - but that was head-scratching: that that could be called a flagrant foul.

"The guy's going to go in for a dunk, you've got to make sure he doesn't dunk it.

"So, I told Kenny [Mauer] that I beg to differ. There might have been a couple of other words in there too!

"I'll have to ask the owner if the clipboard broke when I threw it down. I got a little anger out so that was good. I was too busy yelling to ask for an explanation."