Stars into second BBL final as Hurricanes crash out 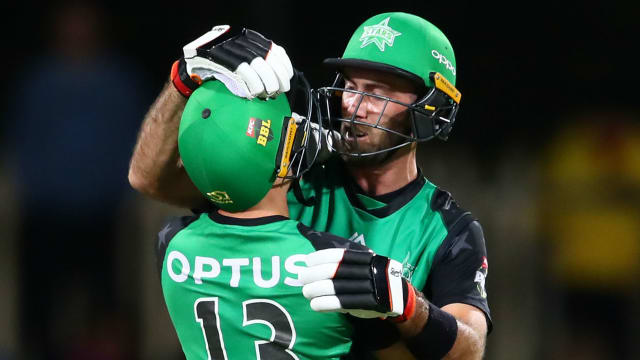 Another team to top the Big Bash League table in the regular season saw their campaign end in the semi-finals as Melbourne Stars booked their place in the final with a six-wicket win over Hobart Hurricanes.

The Hurricanes had lost just four of their 14 games in the regular season and finished six points clear of the fourth-placed Stars.

Hobart also won both of the regular-season contests between the two teams, but the form book was turned on its head as the Hurricanes became the sixth team in seven seasons to top the regular-season table only to tumble out in the last four.

Despite boasting the competition's top two run scorers, the Hurricanes largely failed with the bat. D'Arcy Short looked typically threatening but was removed for 35 off 21 deliveries after opener and captain Matthew Wade had been dismissed for two.

Ben McDermott's half-century gave them hope as they reached a total of 153-7, but the Australia duo of Peter Handscomb (35) and Glenn Maxwell (43 not out) ensured the chase - which saw the Hurricanes' George Bailey suffer a shoulder injury - was successful.

The Stars will now face either neighbours Melbourne Renegades or Sydney Sixers in the final, having lost to Sydney Thunder in their only other appearance at that stage in 2015-16.

Thank you Tasmania for all of your support this season, you really are #TasmaniasTeam .

We'll have news on George Bailey as soon as it comes through. #BBL08 pic.twitter.com/KmKJ48etme

The tone for a frustrating Hurricanes innings was set in the second over as, in his first over, Daniel Worrall drew a thin edge from Wade and then nipped a length delivery back into the middle stump of Caleb Jewell.

Those dismissals left Hobart on 5-2 and, though Short and Bailey (37) helped steady the ship, Adam Zampa claimed the key wicket of the former before Worrall struck another blow by removing Bailey.

A wider delivery was toe-ended by Bailey, who picked out long on, to give Worrall his third wicket, his fourth coming in the penultimate over when he trapped Simon Milenko lbw.

Only three Hurricanes batsmen reached double figures, with McDermott joining Short and Bailey with an innings that helped Hobart at least post a respectable total.

His 53 came at a surprisingly brisk pace of 42 balls despite the right-hander reaching the boundary only twice.

Yet the Hurricanes' talisman was not there for the final two overs as Dwayne Bravo got him to drag a shot to deep midwicket, leaving the tail to flounder as Hobart failed to finish strongly.

MAXWELL AND GOTCH CRUISE TO FINISH

The early dismissal of Ben Dunk did not prove to be foreshadowing for a fightback from the Hurricanes, as Handscomb struck five fours and one six in a 23-ball spell at the crease to keep on top of the run rate.

In that time spinner Qais Ahmad kept Hobart's hopes alive by removing both Marcus Stoinis and Nic Maddinson, and looked as if he could be a potential match-winner when he dismissed Handscomb lbw to leave the Stars 85-4.

However, the partnership of skipper Maxwell and Seb Gotch proved unbreakable, with Bailey's injury - suffered as he dove to prevent a boundary at deep cover - adding to their misery.

Maxwell and Gotch (33 not out) cruised as they combined for an unbroken 72 and got the Stars over the line with seven balls to spare, the latter finishing it off in style with a six over extra cover.