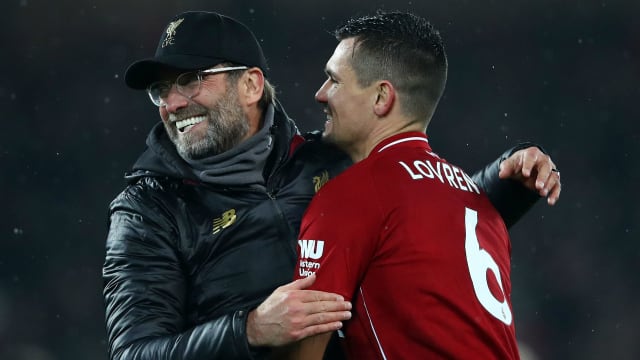 Liverpool boss Jurgen Klopp is planning to face Bayern Munich at Anfield without the services of Dejan Lovren - but has not completely ruled the injured defender out of contention just yet.

Lovren suffered a hamstring injury during the opening minutes of the Reds' FA Cup tie at Wolves on January 7 and has not featured for the first team since.

The Croatia international did not travel with the rest of the squad for a training camp in Marbella this week ahead of the first leg of their Champions League last-16 tie against the Bundesliga champions.

Liverpool are already certain to be without Virgil van Dijk for the game due to suspension and with Joe Gomez sidelined, Klopp may have just one recognised centre-back - Joel Matip - available next Tuesday.

Midfielder Fabinho could be pressed into action as a makeshift defender due to a shortage of options, with the Brazilian having already played there in the 1-0 win at Brighton and Hove Albion last month.

"I don't want to rule it out but I cannot really plan with it," Klopp told the club's official website about Lovren's current status.

"He is not here for good reasons, because he cannot be part of training. We are back on Friday. Then from Saturday on, Dejan is back at Melwood and we will see.

"But, of course, we have to prepare it differently. If Dejan gives a sign on Monday - 'I feel brilliant' - then we'd have to think anew.

"But in the moment we prepare the game and in this preparation Dejan is not involved. We have to find other solutions."

There is better news over Georginio Wijnaldum, however, after the midfielder played through illness to help Liverpool defeat Bournemouth at the weekend, scoring his side's second goal in a 3-0 triumph.

"Gini didn't train yet, that's of course not cool after a very intense game for him," Klopp said.

"So he had a little dip, but will start today so that's good."

After hosting Bayern in European action, Liverpool travel to rivals Manchester United on February 24. A victory at Old Trafford will take Klopp's side back to the top of the Premier League table.