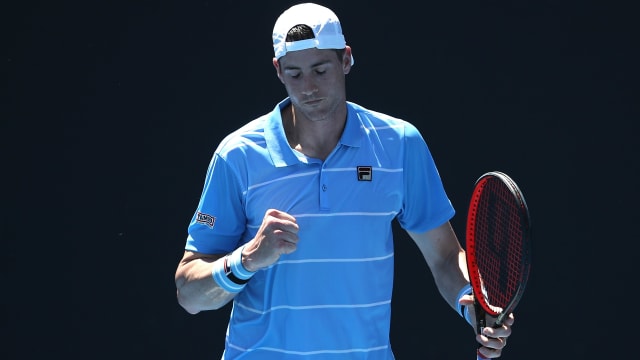 John Isner ended his winless start to the year at the New York Open, while Fabio Fognini was a casualty at the Argentina Open.

Isner was 0-2 in 2019 following defeats at the Auckland Open and Australian Open last month but the big-serving American celebrated victory in New York on Wednesday.

"I had a long time to stew over again not doing well Down Under. It was very tough... I certainly wasn't feeling too great about my game after that," said Isner, who hit 33 aces in the one hour, 14-minute win.

"But the only thing you can do is just continue to keep working hard. For me, keep working on my body. And I used that time to really get stronger. You have to look at it as a blessing in disguise. It really just gave me a bunch of time to keep working hard in the gym, but most importantly just enjoying time with my family."

It was tight, but @JohnIsner 🇺🇸 grabs the first set 7-6(7) against B. Tomic. #NYOpen19#BackInBlackpic.twitter.com/TuT7MBUWpP

Next up for Isner in the last eight is another Australian – seventh seed Jordan Thompson, who beat Christopher Eubanks 4-6 6-1 6-4.

At the Argentina Open, second seed Fognini crashed to a 4-6 6-4 7-5 loss against Jaume Munar in Buenos Aires.

"I'll be surprised if you see a better shot all week"

Countryman and third seed Marco Cecchinato saw off Christian Garin 7-6 (7-4) 6-4, while Roberto Carballes Baena and Guido Pella were also victorious in the last 16.