Halep and Kerber stay in hunt for title in Doha 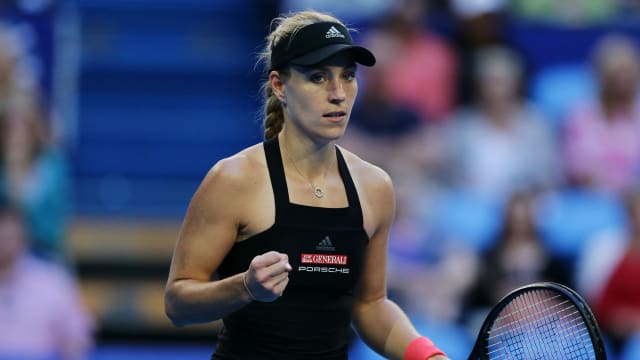 Angelique Kerber fought back from a set down to reach her maiden semi-final of the season and Simona Halep also moved into the last four for the first time this year at the Qatar Open.

Barbora Strycova dominated a flat Kerber in the opening set, but the three-time grand slam champion responded to win 1-6 6-2 7-6 (7-4) in Doha on Thursday.

Halep stayed in contention to win her first tournament with Thierry Van Cleemput as coach by overcoming a battling Julia Goerges 7-6 (7-1) 7-6 (8-6).

Elise Mertens got the better of fifth seed Kiki Bertens 6-4 6-3 and will do battle with Kerber for a place in the final.

Halep will contest her first semi-final since last August after sending Goerges packing.

The French Open champion was made to work by the powerful German, though, coming back from 4-1 down in a second tie-break and saving two set points before winning it with a thunderous forehand.

Mertens only needed the two sets to get past Bertens in what was her fourth career victory over a top-10 opponent.

Bertens started this month by claiming the eighth singles title of her career in St. Petersburg, but she will not add to that tally this week after being broken twice in each set.

KERBER PUSHED ALL THE WAY

Strycova capitalised on an error-strewn first set from a placid Kerber to dominate the first set, but the Wimbledon champion came storming back.

The third seed made 17 unforced errors in a poor opening set, but was much more aggressive as she came from a break down to level the match.

Kerber maintained her momentum to lead 3-0 in the decider, only for the unseeded Czech to win the next four games and save a match point before forcing a tie-break.

The German held it together in the breaker, however, sealing victory with a ferocious cross-court forehand winner.

RUTHLESS SVITOLINA HAS TOO MUCH FOR CZECH OUTSIDER

Svitolina has been struggling with a neck and shoulder problem, but the WTA Finals champion made light work of seeing off the 132-ranked Muchova.

The fourth seed, playing in the quarter-finals of the tournament for the first time, took just 82 minutes to account for the Czech outsider.

Svitolina secured four breaks and made only 15 unforced errors in a dominant display.