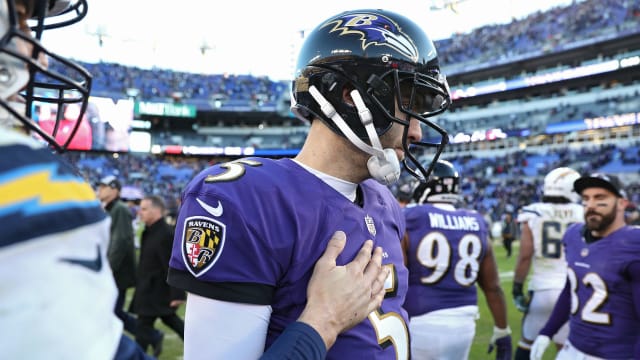 The Denver Broncos reportedly made the first major move of the offseason on Wednesday as they agreed a deal in principle to trade for Baltimore Ravens quarterback Joe Flacco.

A Super Bowl champion with the Ravens, Flacco's departure was expected after he was displaced as starter by Lamar Jackson last season.

However, the destination is curious given Flacco's struggles since winning Super Bowl XLVII at the end of the 2012 season and the Broncos' difficulties in finding consistency at quarterback following Peyton Manning's retirement after their Super Bowl 50 victory.

But just how much of a challenge will it be for offensive coordinator Rich Scangarello and quarterback coach T.C. McCartney to revitalise Flacco? We crunched the Opta numbers to find out.

Though he has been much maligned for his performance since lifting the Lombardi Trophy, Flacco's numbers are impressive compared to those of the Broncos quarterbacks who have followed Manning.

Since entering the NFL in 2008, Flacco has averaged 3,477 passing yards and 19 touchdowns per season. No Broncos QB has had those numbers in a season since Manning in 2014.

Flacco may have outperformed the Manning replacements in his career, but there is no denying his decline following a 2012 season that stands as his high-water mark.

In the 2012-13 playoffs, Flacco threw 11 touchdowns and no interceptions over four games. Since then, he has gone no more than three consecutive games without an interception.

NO IMPROVEMENT ON KEENUM

Flacco's overall numbers in the last six seasons do not paint the picture of a quarterback who will elevate the Denver offense.

He has not been credited with a fourth-quarter comeback or game-winning drive since Week 3 of the 2016 season (a 19-17 win at Jacksonville). Case Keenum was credited with three for the Broncos in 2018 alone.

Looking at the data, Flacco does not appear to even be an upgrade on Keenum, who was mediocre at best in his first season with the Broncos and who Denver will now reportedly look to trade.

With Keenum seemingly heading out the door, it will be interesting to see if the Broncos draft a rookie to learn under Flacco. If they do, and Flacco cannot improve on his post-2012 Baltimore form, the 2008 first-round pick could experience deja vu and eventually find himself benched for a younger alternative once again.