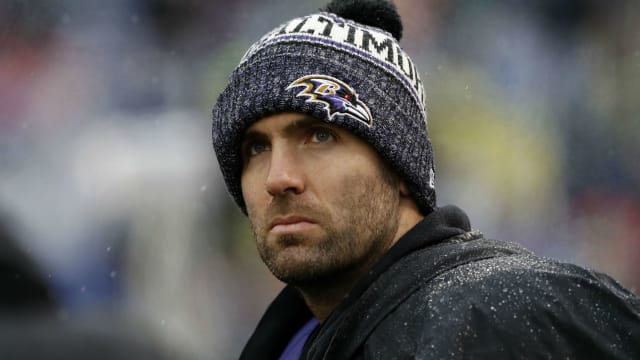 Quarterback Joe Flacco is set to join the Denver Broncos after a trade was agreed with the Baltimore Ravens.

According to reports from ESPN and NFL.com, citing league sources, the Ravens have reached an agreement in principle to trade Flacco to the Broncos in exchange for a mid-round draft pick.

The trade, which was agreed on Wednesday after talks begun on Monday, cannot be processed until new NFL league year begins on March 13, with teams prohibited from publicly discussing it before then.

Flacco's departure was anticipated as rookie quarterback Lamar Jackson filled in admirably for him as the veteran dealt with injuries last season, leading the Ravens into the playoffs.

He will have to rework his deal - which has three years left to run - with the Broncos. Flacco's new team also have Case Keenum under contract for another year under new head coach Vic Fangio, who spent a year as the Ravens' linebackers coach in 2009.

New Broncos HC Vic Fangio spent one season in Baltimore while Joe Flacco was Ravens’ QB and knows what he will be getting. Former Broncos’ exec Gary Kubiak also was a Flacco fan, and has mentioned how much he liked the soon-to-be Broncos’ quarterback. They were strong selling pts

With Jackson in place as the starter for Baltimore going forward, Flacco – who led the franchise to glory in Super Bowl XLVII – was available to teams around the league seeking a QB upgrade.

The 34-year-old has spent his entire career in Baltimore. He completed 61.2 percent of his passes and threw for 12 touchdowns with six interceptions through nine games in 2018, with the team registering a 4-5 record in his starts.

The #Broncos are sending a mid-round pick to the #Ravens for QB Joe Flacco, source said. Baltimore gets back solid return for a QB they replaced mid season.

The Ravens went 72-40 in Flacco’s first seven seasons with the team, but dropped to 24-27 in his final four years as the starter.

Denver have not made the playoffs for three straight years since winning the Super Bowl in the 2015 season.