Sancho out to prove a point against Tottenham 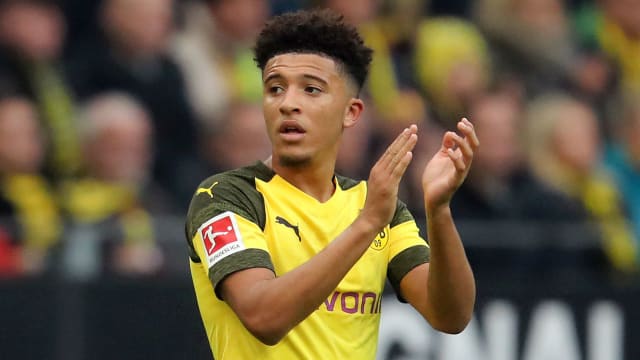 Borussia Dortmund winger Jadon Sancho has resisted the urge to taunt his England team-mates ahead of a meeting with Tottenham in which he admits he has "something more to prove".

England teenager Sancho moved to the Bundesliga in 2017 and has since established himself as one of Europe's most exciting talents.

But having never played in the Premier League, the 18-year-old is aware that there will be a lot of interest in his home country as he takes on Spurs in the Champions League this week.

"You feel you have something more to prove," he told ESPN. "I know a lot of people - especially a lot of young kids and also England fans - will be coming to the game to see what I'm about."

Sancho is set to face Three Lions colleagues such as Kieran Trippier, Eric Dier and Harry Winks, while Dele Alli and Harry Kane are recovering from injuries.

The former Manchester City star has passed up the opportunity to poke fun at his team-mates, though, saying: "[There has been] a lot of 'we'll see you soon' and 'we're going to beat you', just things like that [from Tottenham players].

"Dele? He's got the most to say. I just sit back and stay quiet."

Sancho has been seen as something of a trailblazer after making the early move to Germany, facing Hoffenheim's Reiss Nelson on Saturday while Callum Hudson-Odoi was widely linked with a January move to Bayern Munich.

Crazy crazy game! Disappointing not to get the win but great team effort from the boys today! @BVB Happy to get a goal n also to share the pitch with my close friend @ReissNelson9 it’s been 1 hell of a journey bro but proud of you brother, keep working hard! pic.twitter.com/DJ6ztZN1SQ

Of a potential influx of English players in the Bundesliga, Sancho added: "It's a good feeling, a nice feeling.

"It's a good thing to give other players the opportunities somewhere else and not just at home. Give them a wider vision of what's out there. I'm happy that I've opened doors."