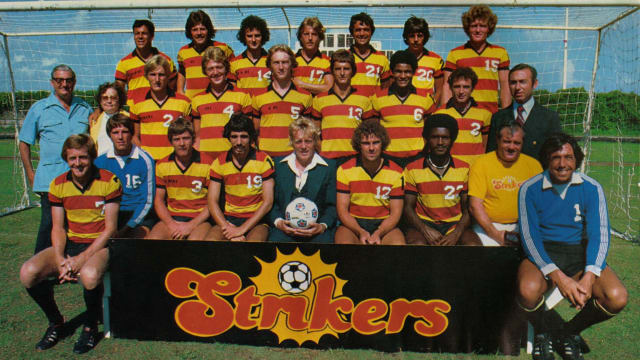 Eleven years after he became a World Cup winner and five years after a car accident left him blind in one eye and forced him to retire, Gordon Banks returned to the game he loved in the United States.

The former England international, who has died at the age of 81, ended his illustrious playing career in the North American Soccer League (NASL) with the rebranded Fort Lauderdale Strikers, who he joined in 1977.

At 39, with a legacy already cemented and a World Cup winners' medal in his back pocket, Banks could have been forgiven for easing off in a state renowned for being a popular retirement destination.

Yet that was not Banks' style.

Despite being unable to see out of his right eye, the 73-cap international was voted to the All-Stars team in his first campaign and was the best player on a Strikers' side that won more regular-season games than anyone else.

"He had such a high work-ethic," his fellow Strikers goalkeeper Van Taylor told Omnisport.

We’re deeply saddened to hear that Gordon Banks, our #WorldCup -winning goalkeeper, has passed away.

Our thoughts are with Gordon’s friends, family and supporters at this difficult time. pic.twitter.com/nbzncYBCFA

"He was first to training, last to leave. He worked hard. There was a time in the pre-season where we would run on the beach from one pier to the other and he would be at the front of that pack every time. He took pride in his professionalism.

"He was so impeccable on angles and positioning. Where maybe I was flopping and making it look like good saves, he would just collect balls. He made things look so easy.

"When training was over he would say, 'Let's just keep a bag of balls'. I learned how to deliver a pretty good cross!"

Taylor had been the franchise's first-choice keeper the season before Banks arrived and, though he took his place in the team, the two became close friends.

As Taylor put it, he saw Banks, 16 years his senior, as a mentor and he learned lessons that stood him in good stead beyond his playing days too.

"I was cleaning out my attic the other day and I found some old Delta Air Lines napkins - when we were on the flight, Gordon and I would do X's and O's, tactics, and he had signed it," Taylor explained.

"We would just talk about the game, as players would, and get a napkin. As it turned out I ended up having a coaching career for 30 years. When I saw that I thought, 'There was one of my first coaching mentors'. It was kind of neat."

I am one of the many who built their dreams on your perfect save!Once more, with all my heart: thank you, dear #GordonBanks

Those long-haul flights became regular occurrences for the Strikers, not that Banks appeared bothered by jet lag.

In one hectic run of four games in nine days, Banks and his team-mates played in Hawaii and Los Angeles before two home fixtures in Florida.

"I don't think we trained, we just showed up," Taylor admitted. "We won all four games on the trot and Gordon just played fantastic."

Banks was one of a number of high-profile players that featured in NASL, along with his old rival Pele and international team-mates Bobby Moore and Geoff Hurst, and Taylor feels those stars had a lasting impact on the sport in America.

"It was a fledging young league and to bring in a player the stature of Gordon laid the ground for what we have now," Taylor explained.

"It was the forerunner for today's MLS. People forget that they were the pioneers. Gordon had a tremendous impact on the league.

"I played in an era where people would say the best goalkeepers came from England at that time. I think Gordon is going to be regarded as one of, if not the, greatest goalkeepers to ever play."