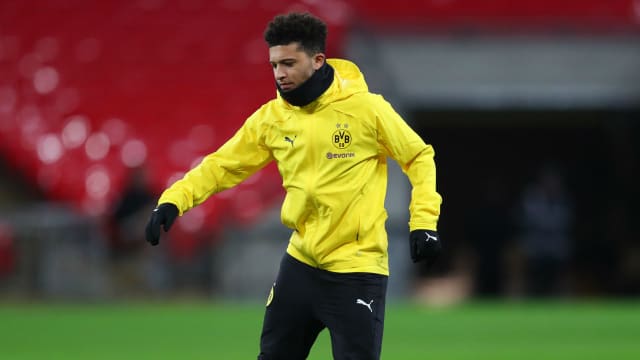 Borussia Dortmund coach Lucien Favre has yet to decide if Jadon Sancho will be punished after he left his passport at home and delayed the team's flight to London ahead of facing Tottenham in the Champions League.

All eyes will be on Sancho when he features against Spurs at Wembley, as the England international is set for something of a homecoming in the city where he grew up.

It will be Sancho's first competitive club match on English soil since opting to leave Manchester City to join Dortmund in 2017.

Still just 18, the winger has made a real impression in the Bundesliga, scoring seven times in 21 league games this season to help his side top the table.

However, his preparations for Wednesday's outing were hardly ideal, as he initially lforgot his passport and had to rush back from the airport to collect it.

When asked if Sancho will be punished, Favre told reporters: "We'll see. We will talk about this between us internally."

Sancho's team-mate Thomas Delaney played down the situation, before praising the teenager, whom he feels responsible for.

"Dortmund is not London [in terms of size], we were only 17 minutes late," Delaney said.

"Jadon is a very great talent, and talent also opens up opportunities. He's only 18 years old, but he's already excellent, and I feel somewhat responsible for keeping him grounded.

"In England he is very hyped, I think he has a big future, but it takes hard work."