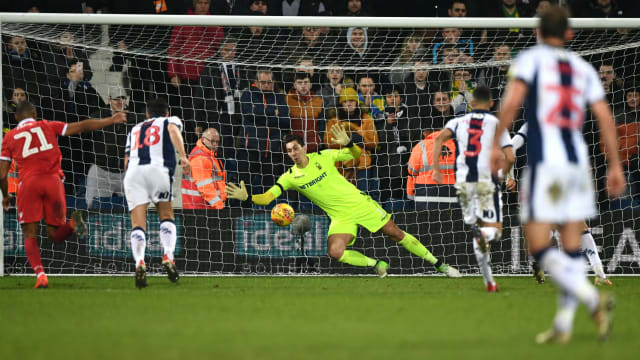 West Brom missed the chance to move up to third as Bolton Wanderers claimed a crucial win at the opposite end of the table in Tuesday's Championship action.

The Baggies had the chance to leapfrog Sheffield United in the standings but had to settle for a point after a 2-2 draw with Nottingham Forest.

Bristol City moved into the play-off places courtesy of a 2-1 win over Queens Park Rangers, meaning they now sit a point behind West Brom.

At the bottom, Rotherham United fought back from two goals down to draw 2-2 at Hull City and Millwall held Sheffield Wednesday to a scoreless stalemate, keeping them in 20th and 21st place respectively.

However, Bolton boosted their survival hopes with an impressive 1-0 triumph at Birmingham City, albeit they remain second from bottom.

The points are shared at The Hawthorns.#WBANOTpic.twitter.com/nAuoqrKgIO

Jay Rodriguez converted a late penalty - awarded for a foul on Dwight Gayle despite Forest's protestations - as West Brom rescued a draw at The Hawthorns.

Forest led twice in a game between two teams with promotion aspirations, their opener coming courtesy of a deflection off Stefan Johansen as he turned Ryan Yates' strike into his own net.

Yates needed no help with the visitors' second goal following a Jacob Murphy equaliser, but Rodriguez held his nerve from the spot in the 89th minute to peg back Forest.

Bristol City scored even later from the spot at home to QPR, Famara Diedhiou firing home in the third minute of added time to extend his side's winning streak in all competitions to nine games.

Bolton ended their long wait for a first league win in 2019 as Callum Connolly's 71st-minute header settled their game against Birmingham at St Andrew's.

Phil Parkinson's side had not triumphed on the road since August 18 but they successfully blunted the Blues, denying Che Adams from equalling Trevor Francis' club record of netting in seven successive league outings.

The result sees Bolton move level with Reading on 26 points, two behind a Millwall side who played out a stalemate with Sheffield Wednesday, who are still yet to concede a goal under new boss Steve Bruce.