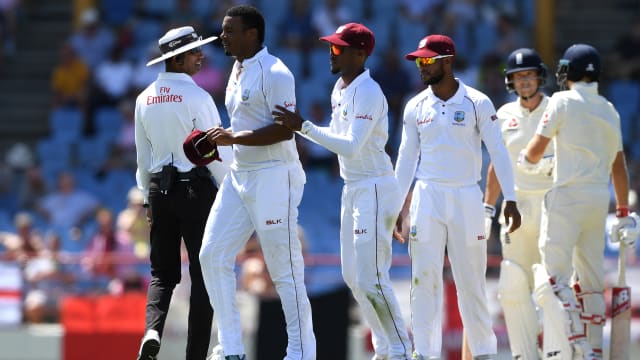 Gabriel was involved in an on-field exchange with Root and Joe Denly on Monday, as England took complete control of the Test in St Lucia.

Root, who scored an unbeaten century as England pushed to 325-4 and a 448-run lead, said Gabriel may be disappointed by his comments, although he was unwilling to go into detail.

"It's Test cricket, he's an emotional guy trying to do everything he can to win a Test match," he said.

"Sometimes people say things on the field that they might regret, but they should stay on the field.

"He's a good guy who plays hard cricket and is proud to be in the position he is. The battle was a good contest, he's had a wonderful series and he should be proud."

Windies interim head coach Richard Pybus said the incident would be looked into.

"Nothing has been reported to me," he said. "But if a comment was made, we'll review it. And, if it was untoward, we'll be addressing it."

Root (111 not out), Denly (69) and Jos Buttler (56) helped England into a commanding position as they look to avoid a series whitewash.