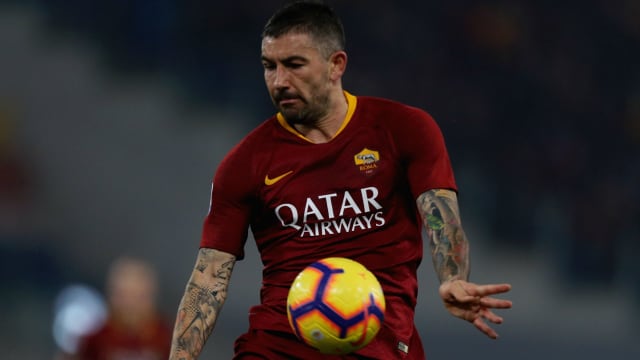 Daniele De Rossi has called on Roma fans to repair their "fractured" relationship with Aleksandar Kolarov ahead of Tuesday's Champions League clash with Porto.

Kolarov was heavily criticised after his performance in the 7-1 Coppa Italia defeat at the hands of Fiorentina last month, with offensive graffiti written near his house in the aftermath to the game.

Having been jeered during the 1-1 home draw against AC Milan four days after the Fiorentina game, the former Lazio player bowed to the travelling support after scoring in last Friday's 3-0 triumph at Chievo.

Roma coach Eusebio Di Francesco said after the Serie A fixture it was an apologetic gesture from Kolarov, rather than a sarcastic response to the current situation.

Ahead of the first leg of their last-16 tie at the Stadio Olimpico, the influential De Rossi has spoken out in support of his team-mate, praising his professionalism while describing him as "like a brother".

EDF: "We need to be strong defensively tomorrow. It's vital that we don't concede, although we can't allow that desire to compromise our identity and the way we want to play."
#ASRoma#UCL#RomaPortopic.twitter.com/u2kZ6aFcL7

"Should this little fractured relationship be repaired, I would be the happiest man in the world, even because I feel part of it since I love the Roma fans and they always defended and protected me," the midfielder told the media.

"Aleksandar is like a brother to me. What I can tell the fans is: you always trusted me, do it again now when I say he is a great professional and so focused on what he is doing.

"I am not saying he is a Romanista since he was a kid, no. I am saying he always gives his best, never skipped a training session and often played in difficult conditions.

"I'd rather have someone like him than those who kiss your shirt and give honey-dripped quotes about fans but then they don't stop for autographs or raise their eyebrows when asked to play in a different role.

"Kolarov is a professional like a few others I know, then you have to remember fans are to be respected and sometimes understood when bad results make everything more nervous. To mend this relationship, tomorrow is the best day and that would make me the happiest one."

De Rossi: "I've always said that I'll keep playing as long as I feel fine physically. Teammates and the coach talk about my importance, but perhaps they don't realise how important they've been to me in recent years. I want to thank them for that."
#ASRoma#UCL#RomaPortopic.twitter.com/G5oDK9qqA4

De Rossi helped Roma reach the last four in the Champions League last year and while he will turn 36 before the start of the 2019-20 season, he has no plans to retire just yet.

"I always said that if I am fit I will keep playing. My team-mates and my manager have no idea how important they are for me," he replied when asked about his future.

"In the last three seasons they made me feel as important as I had never felt before in my career. I have to thank them for this.

"I see performances are good but they are so because when you feel important and you are fit to play everything comes easy. I can only express gratitude for how much they made me feel desired in those three months when I was only an observer."