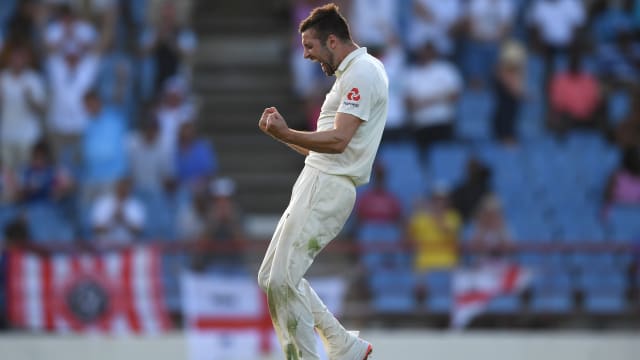 England paceman Mark Wood described his five-wicket haul against West Indies as better than taking the Ashes-winning scalp in 2015.

Playing his first Test since May 2018, Wood took 5-41 in St Lucia on Sunday to put England in a strong position in the third Test.

It marked his first five-wicket haul in Tests as the Windies were bowled out for 154, England finishing the day with a 142-run lead.

Wood took the wicket that sealed the Ashes against Australia in 2015, but he felt day two at the Darren Sammy National Cricket Stadium was even better.

"There have been dark days and plenty of self-doubt but I felt like I belonged," Wood told the BBC.

"I managed to take the Ashes-winning wicket but I think today trumped that.

"I have got to back it up now and that is a sign of a true fast bowler."

Wood believes his performance was proof he could deliver at Test level, as he features in the five-day format for the 13th time for England.

"There have been times where I wondered whether I would play for England in Test cricket again," he said.

"I am pleased I have shown people at least for one day that I can be a proper England cricketer."