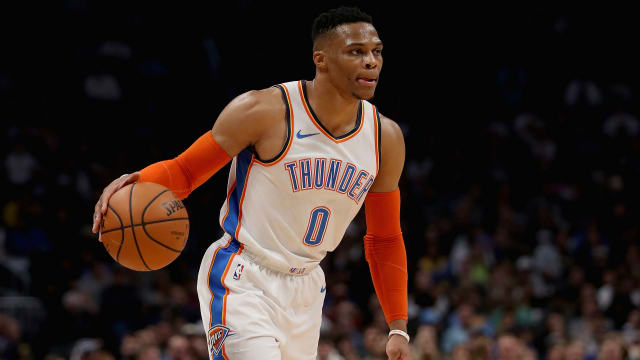 Westbrook extended his streak with 21 points, 11 assists and 12 rebounds in the NBA on Saturday to match the record set by Wilt Chamberlain in 1968.

James Harden scored 42 points – reaching 30 points for the 29th consecutive game – but missed some big shots down the stretch for the Rockets.

Marc Gasol – a deadline day acquisition from the Memphis Grizzlies – scored seven points and six rebounds in the Toronto Raptors' 104-99 win over the New York Knicks.

The pass off the backboard from Dennis Smith Jr. to DeAndre Jordan was a bright spot in the Knicks' loss to the Raptors – a franchise record-tying 16th straight defeat.

Dennis Smith Jr. to DeAndre Jordan OFF THE GLASS! #NewYorkForever

Ricky Rubio showcased his vision with this feed to Rudy Gobert in the Utah Jazz's 125-105 triumph over the San Antonio Spurs.

The Philadelphia 76ers dominated the Los Angeles Lakers in the last matchup between these two teams. Now the 76ers have a new and much more potent starting line-up. The Lakers will have their hands full taking on this gifted 76ers team at the Wells Fargo Center.