'Oh s***, it caught me off guard' - Embiid on Simmons' three-point attempt 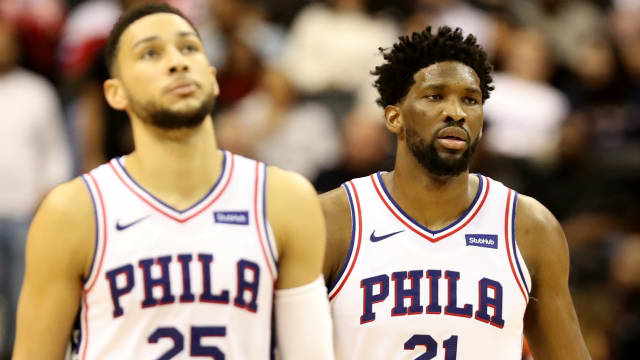 Reigning NBA Rookie of the Year Simmons does not shoot many three-pointers but the Australian guard tried his luck in Sunday's 143-120 win over the Lakers in Philadelphia.

Simmons - who has never nailed a three-pointer in his NBA career - narrowly missed a shot from beyond the arc against the Lakers, drawing a hilarious reaction from fellow All-Star Embiid post-game.

"I was getting ready to run the play, and then I literally just saw the ball go over," Embiid said. "And then I was like, oh, s***! It caught me off guard.

"And then I'm in a position where I'm like, what just happened? I thought it was in."

.@JoelEmbiid posts his 23rd game with at least 30 points and 10 rebounds in the win over Los Angeles. #HereTheyComepic.twitter.com/jskFSswGus

"I wish he would have made it. He's been working on it. Every day we tell him, you got to shoot it," Embiid added. "There's nothing wrong with [taking open shots and missing]. I'm a 30 percent three-point shooter, and you got guys who still jump on my fake.

"Every day he works on it, and I think it's coming. That was the first step, and I hope that he keeps shooting."

Simmons had a cold shooting night against Los Angeles. He only connected on three of his 13 shots for eight points.

On Simmons' three-point effort, 76ers head coach Brett Brown said: "I thought the shot looked good, the rhythm going into looked good, it was close to going in and he didn’t look uncomfortable shooting it."